This is what happens when you stay out of the garden for a week. It explodes!

The weather this past week has been considerably warmer, topping 40C degrees on Thursday with some heavy rain and storms too. It’s clearly been good growing weather as the garden is proving. Sadly, the grass concurs as it has grown enough to nearly need working in just 6 days. 😦

We spent a grand total of 15 minutes in Ballan this evening, a dropping off of some boxes and other stuff after having spent the day in Bendigo with my extended family for Christmas. We have had a lovely, but long day and didn’t make it home until nearly 9pm. But having that 5 minute check out of the gardens has been wonderful. Here’s the tally.

I’ve lost a few Marigold seedlings, suspected snails and slugs as well as possibly planting some too deep. I have more to plant so I’m not concerned. The various herbs are all doing well and the pyrethrum and parsley which were looking a little wan last week have bounced back green and strong. I’ve lost a couple of my sunflower seedlings, but as they’re not fans f being transplanted I am not overly surprised at their loss. In fact, I’m surprised I didn’t lose more. And the sunflower seeds I planted last Sunday evening are already starting to sprout and wave their cotyledon around in the sunshine. 🙂

Sunflower seedlings. I only planted single seeds but there were some broken ones that I threw in too. Either some seeds hold twins or the broken ones sprouted! 😮 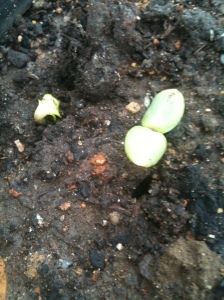 Ground-burst and a new born plant.

Venturing in to the vegetable garden proper and I nearly fell over. The pumpkins have grown nearly a whole foot! Beware the unguarded as they will take over the garden if left unsupervised! 😉 Well, if they give me lots of big golden pumpkins, I say let them! My lone butternut pumpkin (butternut squash to my British and American friends) who was given a doubtful survival chance has proven to be only slightly less tenacious than my one remaining watermelon plant and almost as vigorous as his pumpkin cousins. 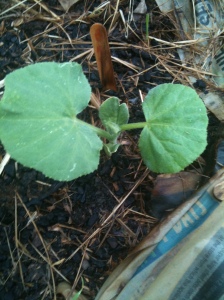 The beans are putting out their second sets of true leaves and even a few third sets too which is great. I fully expect them to start making use of the fence in the next week. Hoping I get some to harvest for Christmas but not counting those chickens quite yet.

Some of the corn are going gangbusters and the others are not far behind and I will plant some more seeds tomorrow to increase the potential corn harvest. The zucchinis are doing well too although I’ve desperately got to weed the corn, kini and melon bed as the straw I used as mulch obviously still had a lot of grain attached – it’s all sprouted. 😦 Not bad for a fairly shaded garden bed. I think Martin will be cracking out the chainsaw tomorrow on that tree. 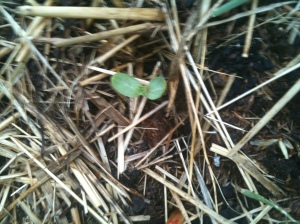 My one and only lonely watermelon seedling.

The onions and chives are doing well although it’s still hard to see too much happening. I don’t think I will get a good crop this year but I don’t think they do too well with freshly built no dig garden beds. Time will tell though.

The broccoli haven’t done too badly either although something is having a fine time munching on the leaves. 😦 2 of the seedlings have shown me just how much they love me though as they have quadrupled in size and are going great guns. I wonder if they will provide something for Christmas lunch. I doubt it but I live in hope. The rest have done pretty well too, considering how sickly a few of them were. Not all survived but I was pretty sure that some of them would just not make it. Still and all, no harm in trying. 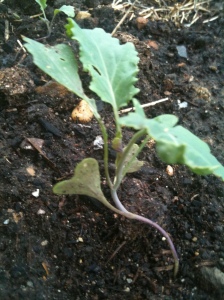 My currently empty and awaiting more tomato seedlings bed is doing well too. Clearly the newspapers weren’t thick enough to stop one particularly tenacious weed as the rotten thing has come up smack bang in the middle of the garden bed. Its brothers and sisters have also come up in other areas. I have a feeling that it might need to get up close and personal with some natural herbicide (read salt and vinegar) or be completely, totally and utterly dug out. 😦

The planted tomato bed is going very well too as all it’s tomato inhabitants have at least doubled in size. One of my capsicums has died but the rest are doing well and it appears I even have some flower buds on there. Yay!

The radishes have also all doubled in size and in fact I can see the beginnings of those red roots that I eagerly await. And if I look closely underneath the shade of their leaves I can indeed see carrots beginning to wave at me. The few I thought may have been carrots last week turned out to be a few washed out of line radishes. 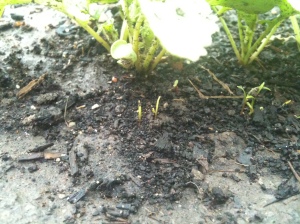 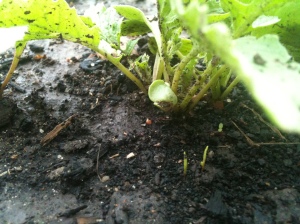 And most impressively of all are the spuds! I need to get another load of compost with which to bury them again already! It’s only been 2 weeks since I last buried them! 😮

Spuds anyone. Just wish I had X-ray vision to see what’s happening under the soil. The most vigorous of our spuds have been the Sapphire spuds.

It’s unbelievable what a little sunshine and rain can do. 😀

15 thoughts on “An explosion in the garden”