I spent yesterday afternoon building a new shed for our, hopefully soon to have permission from my husband to get, goats. 😀 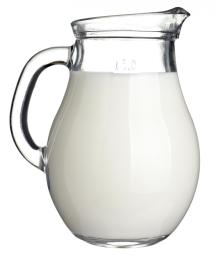 I did a little rough maths the other day. We go through a LOT of milk in our house. I drink a glass a day, the kids and I all have a hot chocolate “coffee” in the morning and that alone uses 700ml of milk. I usually make us yoghurt and we have custard at least once a week. Orik is also only 18 months old and although I continue to breastfeed him we supplement with milk so he too drinks a lot. I also make milk kefir although this doesn’t use that much really. Still and all on a heavy milk day we can use 3 litres a day – up to 21 litre a week! We don’t buy Coles milk at $1/L so we conservatively worked out at between $4 and $5 for our 3 litre bottle. So if we say 20 litres a week at $4 per 3 litre that is about $28 a week. Per year? Around $1500! Add onto that any cheese, sour cream, cream, butter and any other dairy we may purchase and that is a LOT of money. This is a VERY rough cost analysis and I haven’t done a further one (I’m too scared at just how much we could well be spending on dairy) and it’s a lot of money to give to an industry that has some questionable practices to say the least. It’s also worked out on non-organic milk. I hate to think how much the organic milk costs per litre. 😦

Dairy cows, like all lactating mammals (humans included) do not just make milk. Milk is created to feed an infant and the hormones during pregnancy begin preparing the mammary glands to create firstly colostrum, a thick nutrient dense pre-milk that in small quantities packs a mega nutritional punch to allow the infant to feed until the milk production begins. Once the milk comes in it is initially a result of the hormones produced when the infant is born. Over time the hormones begin to drop but by this stage lactation should be established to then have a supply and demand situation. The continuation of an infant feeding alerts the mammary glands that the milk is being used and hence more must be created. Once demand drops, so does the supply. So, when a calf begins to wean onto grass (a quick glance shows that to be from 4 weeks of age by people) or 8 – 10 months naturally, the milk will then dry up. Naturally, the dairy industry will wish to access and keep as much of that milk as possible and keep demand as high as possible too. So, when a cow gives birth, her calf is most likely removed from her and fed a milk substitute such as formula so that the milk can be kept for sale. Girl calves or heifers may be of value to the farmer as she will grow up, can be mated and then in her turn produce more milk but the boy or bull calves and excess heifers pose a problem. Bobby calves, calves that are less than 2 weeks old and considered surplus to requirement are either raised as veal (baby beef), to join the herd (as I mentioned before) or sent to slaughter. I found this article by the RSPCA outlining the rules for this and even if they are met it is a sad fate for any baby.

Other things that I dislike about the dairy industry is that all milk by law, when sold for human consumption, MUST be pasteurised. Pasteurisation is where the milk or cream are heated to 70 °C (158 °F) and then cooled immediately and it was named after the bloke who discovered that heat kills bacteria, Louis Pasteur. Yes, you CAN buy raw or unpasteurised milk but it is sold for cosmetic or pet use only and if you choose to drink it then it is at your own risk. The reason for pasteurisation is to kill any potentially harmful bacteria that may get into the milk. I can understand and respect that however, I prefer the idea of keeping sanitary conditions for cows, rather than having to kill the good bacteria along with the bad.

The milk, unless from organically kept cows, may well contain antibiotics (to help kill those same bacteria) and who knows what else. What the residual drugs that pass through the cow, into the milk and then into our bodies are doing to us I don’t pretend to know, but it does worry me. I don’t know much, if anything about it though.

Another part of the dairy industry that I dislike is the carbon miles of our milk. I’m not sure where the milk that I drink comes from. I presume it’s relatively local as we buy a local milk but even so there could be 100’s of kilometres still of carbon miles from dairy, to pasteurisation and bottling plant then to the shop where we purchase it and take it home.

I also don’t know how commercial cheese is produced but I would love the chance to make it at home from raw milk too. Being able to make it ourselves will open up so many more varieties to us that may not be readily available if at all. I hang on every word of Little Green Cheese, the cheese blog by self-confessed curd nerd (great term 😀 ) Gavin Webber from The Greening of Gavin fame. He talks about cheeses I’ve never heard of like Wensleydale.  I can’t wait to try to make my own. 🙂

We have insufficient room and grass to keep cows and I am still disappointed about that. I was desperately hoping for a Dexter breed house cow but it’s not to be. However, goats aren’t big grass eaters, preferring to eat plants including roses, blackberries and hawthorn (I do question the sanity of any animal that wants to eat some seriously thorny plants like those but hey, we have hawthorns galore so they’re welcome to the nasty plants) and the leaves and small branches of poplars and other trees. They’re going to be great at helping us clean up the weeds from our garden! 😀 Goats also produce less milk than a standard cow which sounds bad until you realise that a cow might produce 10 litres a day for you (Dexters produce a lot less)! I don’t fancy the idea of milk baths, no matter how wonderful Cleopatra found them. And goats are also smaller than a normal cow so the kids won’t be as overwhelmed by their size. Nor will I when I milk them!

So, anyway, I spent yesterday afternoon digging 2 post holes by hand and putting up some corrugated iron on a wall and today I had planned to get the posts and some rapid set and get the posts in (I need to dig another hole yet sadly 😦 ) and then I can get the iron up and hey presto, a goat shed! 😀 Sadly, the best laid plans and all that jazz… Today has not been a write off though. In fact it’s been very successful. 🙂 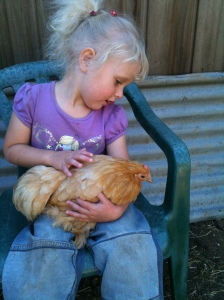 Allegra and her Honey. And it’s one contented (resigned?) hen too.

I had organised to meet a friend at the Ballarat Produce Swap and swap some of our hens and a rooster for some of her roosters. She is another Silver-Grey Dorking owner and fan but her young hens got excited and interested in a fox attack last year and poked their heads out of the wire to take a look. It’s the last thing they did. Whoops. We have 4 mature hens we will be keeping and the 5 hens from the 2nd generation of chicks we purchased were surplus to our egg needs and had been earmarked for the table. My friend has many hen varieties and raises them naturally like we do and was desperate for some Dorking hens so the swap worked well. I now have 4 very noisy and large roosters of mixed breed (bred for rapid growth and for taste 🙂 ) in exchange for 5 hens and one of our older roosters to add to her blood-lines. I separated out the hens and rooster last night and popped them in our cat carrier this morning just before I left. They’re now settling in to their new home and loving it from all accounts. 🙂 We, on the other hand have 4 large table birds currently on death row and given the noise they’re making it can’t be soon enough. Black Boy, our Black Dorking rooster rarely crows, He doesn’t need to as he knows how superior he is but these other 4 haven’t shut up since they were released from the cat carrier. If we don’t cull tomorrow our neighbours will shoot us instead!

This mornings plans however were to involve me having the morning off to run into Ballarat, swap the chooks and home but things had to change with a sick husband (really sick, not man flu) and a vomiting daughter who puked on the couch, then her daddy, then the blankets, then her pyjamas and finally our bed so she had me running around washing and cleaning up all morning. Thankfully she’s much better now but Martin has been laying low trying to shake off his cold. He had planned a big clean up around here to make the front of the house look presentable and maybe to chop up some more wood for the fireplace but it wasn’t meant to be. Orik went down for his nap at 10, I loaded chooks and Jasper into the car whilst my sickies slept on the couch and we went and swapped our hens and roosters, made plans for further bartering of eggs in the future and had a lovely natter.

This afternoon I had 2 boys to look after, swapping a wide awake and cheeky Orik for an asleep on the couch then transferred to bed Allegra. With my boys in the garden I hung out 1/3 of the wet washing (about 3 loads there alone I think) and then built a shelving unit for sprouting grain. Friends at Living on a One Dollar Dream have been sprouting their oats and barley for their chooks and goats and I fancied giving it a try too. Using only scrap lumber – off cuts from our new stairs and the rails from the old stairs, a box of hex screws (all new bar 1), a saw and my favourite tool, Martin’s impact driver, I knocked up a shelving unit that holds sprouting trays sourced from a local nursery. I can then soak my grain for a day, load it into the shelves and leave it there for the time it needs to sprout, loading up a new tray each day and when the shelves are full, feeding the sprouted and growing grain to the chooks, and later, goats. It ain’t pretty, it’s a bit wobbly, my measurements suck and I’ve split the wood more than once (pre-drilling is a pain!) but I have a shelf that should be adequate for the job. I’m happy. 🙂 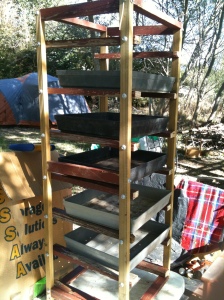 Tomorrow is earmarked for shed completion. I am itching to get back in the chook pen and getting it finished. I may even set in the posts tonight so I can get working tomorrow. 🙂

29 thoughts on “Shedding and shelving and sprouting and stuff”