The weather the last 2 days (and continuing on into next week) is a last hurrah to Summer. Well, I’m hoping it’s the last one. The weather has been lovely and Thursday was nothing short of sensational. 25 degrees, light breeze, lower UV index which means I was outside enjoying the sun and I didn’t get burned! 😀 I plowed through washing and hanging 8 or so loads of washing, moved the chook grains into our new storage area (6 bags of 20kg each, 1 bag of oats at 25kg and another which is probably 15 now plus a probably 40kg bag of barley) and the kids and I with some clever maneuvering and a trolley, moved a rather heavy reclining couch in there too. It’s cleared the way to allow us to store our big delivery of redgum and Martin’s hard harvested stringy-bark and other woods in our smaller shed out of the weather. We started moving that but needless to say, by that time I was completely stuffed so the wood was left for another day and someone elses muscles to groan over.

Yesterday was another mighty fine day although there was some cloud teasing us and making us hope that there might indeed be some rain on the way but there was not. Good news as far as I achieved much but bad news as the Autumn hasn’t brought us much more rain that the Summer did and we are in desperate need of some precipitation. The grass that awoke from its drought induced slumber a few weeks ago is most disappointed at the fickle nature of rain in this neck of the woods and hasn’t grown in weeks. I’m desperate for it to do so as there isn’t enough to feed a rabbit for a week let alone the plans I have for this green stuff over the coming weeks.

We did however make great use of the wonderful weather and after a trip to playgroup in the morning we came home and had some lunch, popped Orik down for a late nap and then the older kids and I hit the gardens. I built 1 garden bed frame (corrugated iron and wooden corner posts make a raised bed 🙂 ) then cardboarded under 1 I had finished a while back and the new one, lined the bottom of 1 with the dried corn cobs and husks from the big corn canning run a few weeks ago and the other was covered in a nice layer of fallen poplar leaves. It will be interesting to see which bed does better. I then started digging the soil out of our carrot garden bed which, apart from harvesting a few radishes from, was pretty much a failure. I think that’s more on behalf of the fact that it’s hard to grow carrots as they can’t be mulched and they need constant moisture whilst they are coming up, something that is nigh on impossible to do outside, without a watering system in 30-40 degree heat. A few came up and struggled mightily until I cut my losses, transplanted the few seedling that had survived into the greenhouse and left the bath bed fallow. Yes, I know you can’t/shouldn’t transplant carrots but I figured it was worth doing anyway even if they don’t survive (which most have) or grow all wonky and lame roots. I couldn’t just pull them out after the hard struggle they’d had. And I’m too tight to waste them anyway. 😉

Corn cobs, leaves, silks and failed corn plants in a hugelkultur style base. Hoping they absorb a heap of water and also rot down to provide nutrients for the plants and worms.

So, the soil from the bath bed has mostly ended up in the bed with the leaves or all over the place after the assistance of 2 small people who, if I had added water would have been walking talking mud baths. Nice one kids. 😉 Once I’d finished there I remembered that the spud boxes (large apple crates) were sitting pretty full of the most divinely composted lucerne and sugar cane mulch and horse manure. I dug into the soil, turned it over and was greeted by a rather large collection of fat worms. Seriously, this particular spud box (the others weren’t so impressively worm-filled) was like densely packed high rise apartment worm living. I’ve only ever seen more worms in one place inside a worm farm! It was insanely wormy. 😀 Imagine all the castings and worm wee in that soil! I still want to get a worm farm for us here but in the mean time it looks like I have had one anyway. 🙂 I dug out all the soil (and worms) into the trolley barrow Martin bought me to tide me over until we can fix the wheel on the other barrow and lugged it down to tip into the garden bed. That 1 spud box filled the first bed and the other 2 less densely wormed spud boxes filled the second veggie bed which has the corn cobs on the base. Again it will be interesting to see which bed grows best. 2 veggie beds ready for planting. 🙂 I’m trying to decide if I plant them with an allium (garlic, onions, leeks, etc) or broad beans and I am leaning towards garlic to be honest. The broad beans are nitrogen fixers so they will draw nitrogen from the atmosphere and enrich the soil in their beds as they go as well as keeping and using what they need. The garlic or onions or leeks will profit greatly from the rich soil. I guess I’ve answered my own question there haven’t I? lol I might see if I can get some onion seedlings today as mine haven’t done so well and some more seeds to sow direct too. Reading Gavin’s post on growing onions has definitely been an inspiration here. Thanks Gav. 🙂 I did forget to get a photo of the beds finished but they don’t look much different. Just filled right up with rich dark compost. 🙂 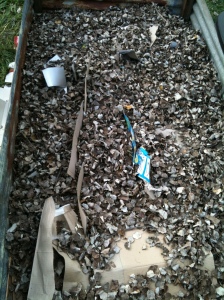 And leaves in the base. Hoping they too rot down to feed both worms and plants.

Whilst emptying out the potato boxes I found a few more undersized spuds which I’ve decided to see if I can grow over the winter but in the greenhouse. I have a vacant bed which I intend to compost in but it is a big bed so I think I might compost 1 end and spud the other. Both will be topped up as needed and can be done at a similar pace. I figure it’s worth a try and taking a second shot at a potato harvest. Either way I fill the bed is a win. 🙂 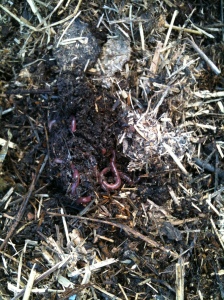 Not sure if you can see but there are at least 10 worms int his shot. That’s an area the size of my hand. Seriously close living quarters!

I need to finished off the remaining beds as soon as possible too as I have my brassicas to plant out although I’m keen to hold off at the moment as the white cabbage moths are still rampant. My broccoli have been decimated! Autumn is just as busy as Spring! 🙂

It was a long afternoon as far as my already aching muscles were concerned and I must admit as I sit here this morning my back is a wee bit achey (nothing that lugging a heavy toddler around at the Rural Lifestyle Expo today in my ergo carrier won’t fix 😉 ) but it has been so very worth it. I hope to finish off the extra beds tomorrow and I think our friend Farmer Mark might be getting a call so we can buy some more compost. 🙂

Here’s to making the most of these last days of a long and lingering summer. 🙂

13 thoughts on “Autumn in the garden”