We have the sickness. 😦 Nothing serious, just kids with colds but for anyone out there who is a parent or looks after small children you will understand what small children with snot involves. I once heard Bill Cosby describe a child with a cold as a glazed doughnut and so far I’ve found that to be 100% true. A glazed doughnut that wants to be up close and personal with you, who wipes their glaze on you, wants kisses and snuggles and doesn’t sleep.

Yes, we have 3 sick kids. They’re sick enough that we’re not going anywhere as they will be infectious and shunned like snotty little lepers but they’re also not sick enough that I can bung them in bed to sleep it off. They’re uncomfortable with sore noses that need near constant wiping (and they have been incredibly patient with it too I must say), sick enough to be sensitive to everything and off their food but not sick enough to keep them from bickering. It’s fun. 😦 They’re definitely not sick enough to just fall into miserable unconsciousness at night either. Sleep is the great healer of colds but if we’re waiting for sleep to heal them we will be here all year. Orik was up and down like a yoyo and content only when snuggled in bed all night with us (he loves to sleep sideways unfortunately with his feet on my side and he kicks like a fiend). Jas woke several times with night terrors (similar state of dreaming to sleep walking but child simply screams blue murder for 20-45 minutes) and then couldn’t get back to sleep and Allegra is a little croupy with her cold too and had lost whichever toy she took to bed last night at some awful hour. Martin and I managed to sleep maybe 3-4 hours each, never in stretches of more than an hour and usually around 15 minute stretches only. I don’t drink coffee and never ever instant but I am seriously contemplating it today. *yawn*

iPhones don’t capture the colour too well. Red sky in the morning eventuated to nothing thankfully.

And the weather is kind of revolting too. Yesterday started off with quite a frost that lingered in the shade until after 10:30am but warmed up enough to throw Jasper and Allegra out into the glorious solar spill but today they would be blown to the other end of town should I try. It’s well gusty! So, in my mind, with a cool day, sick kids and gale force winds it’s a good day to stay inside near the fire.

I made playdough on Wednesday and added in lavender oil as an extra sensory element and it has made all the difference. They kids played calmly and quietly with the playdough for 2 hours! BLISS! I will be breaking the playdough out again today I think. The lavender is antiseptic so it can only help with killing off the snotty germs, it’s calming which is a great thing with sensitive sick kids and it smells really lovely so I can just enjoy the smell. 🙂

I also made up what I’ve dubbed “cold medicine” from a recipe a friend gave me some time back. It uses elderberries, cloves, fresh ginger, cinnamon and raw honey and I must admit it tastes sensational. I love being the mum that says “medicine time” and I have 3 children literally trying to climb me for their dose! It’s natural, healthy, delicious and thumbs the nose at big pharma too so it ticks all my boxes. I just simmered 1 cup of elderberries with a stick of cinnamon, 5 or 6 cloves, 2 tablespoons of freshly grated ginger and 2 cups of water until the liquid has reduced by half. Once cooled, stir in the honey until it’s dissolved and I dose about 1 teaspoon 3 times a day. It keeps in the fridge for about a month. The ingredients are all natural and immuno boosting, antibacterial or antiseptic and it also means I can make it at home.* 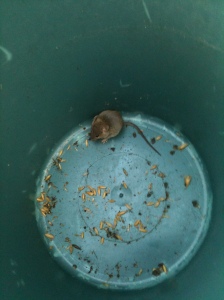 This little fellow has been after the barley I sprout for the chooks. His mate drowned in the oats bucket last week.

Well, time for that playdough I think.

Ok, an update as it’s midnight and I am yet to post. Internet went down around 9am and didn’t return until well after 8pm so Peppa Pig never completed downloading and subsequently jammed up and wouldn’t work. I’ve also had a miserable Jasper with a sore throat who has blessedly done what’s best and slept most of the day away as has Orik (my poor sick boys) and Allegra, also sick but being a drama queen just like her mother when sick, imperiously demanding to be nursed back to health with “bezimite on toase”. It’s been an interesting day. 😉 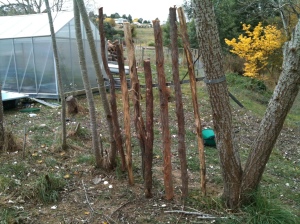 An experiment in fencing. More to come on this. 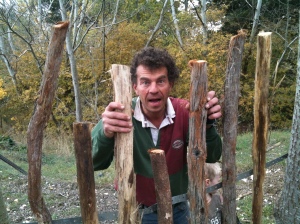 15 thoughts on “A good day to hunker down inside”