It’s a magic moment when you sink onto the couch at the end of the day, having worked hard and then realising you ache so much that you can’t get up again. 🙂 Yes, that’s right, magic moment! I LOVE that feeling. Ok, well maybe I don’t actually like being in pain but the satisfaction of having truly earned those aches and pains is awesome. 😀

Yes, another weekend and another long list of jobs to do, a good portion of which we actually achieved. 😀 So, where to start? 🙂

Yesterday we started the day off by voting. Never an inspiring start to the day but there you have it. I had an errand to run up the other end of town and took Allegra with me so I ended up with funny company in the voting line until we got 3 from the front where of course a pit stop was required. 😦 Thankfully we were able to go to the head of the line upon returning . I hadn’t fancied another 20 minutes lined up waiting. We voted, went home, grabbed the necessaries and the boys and then headed off to Myrniong.

Martin and Jasper were heading out for a day of boy bonding and petrol. A work colleague of Martin’s who lives not too far away had organised a day of rally driving in Myrniong so I was to drop them off so as to have the car. We then headed off to Newlyn East and Newlyn Antiques and Nursery to get some grape vines and more fruit trees. Loaded up with a Lapins Cherry, a Granny Smith Apple and 4 grape vines (2 White Muscat, 1 Sultana and 1 Black Hamburg) we then headed up the road a couple of hundred metres to drop in to Bells Water Gardens. Bells are currently open only to commercial buyers but kindly opened their doors to me and talked me through pond plants, allowed Allegra to feed and play with the fish and Orik was happy watching the dogs and fish too. A quick run to Creswick for cash (no card facilities which I forgot to ask about prior) and we were back to load up the bags of aqua fauna.

Home again home again jiggety jig to drop off the plants before putting the car seat back in and heading off to pick up my boys. A slight misunderstanding meant I was just a little late to pick them up but they were forgiving. 🙂 Finally we were home to stay. I then had some time to put my plants in the pond and fill it up which was lovely. It will take some time for the plants to fill out the pond but there area several species in there including some natives and some edibles (Water Hawthorn (Aponogeton distachyos) and Water Chestnuts (Eleocharis dulcis)) and once the water has settled and the plants have helped the water to become fish friendly we will introduce some new inhabitants to the pond. I also hope that our local frogs will choose to move in once the plants are established. The gentle “Bhok! Bhok! we hear from the creek would be just lovely not far from our bedroom window on a Summers night. 🙂 Anyway, my pond is actually looking like a real pond and, with enough plant-life in there, it will not need any pumps or filters, whether fossil fuel or solar-powered and it will help create a lovely micro-climate and add hopefully beauty and fragrance to our garden. I am very very proud of it. 🙂 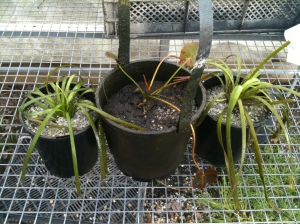 The plant in the middle is a water lily (nymphaea) although I can’t tell you which one. I have a red and a pink in there at the moment. The 2 plants either side are called tape grass, eel grass or Vallis. It’s officially Vallisneria.

Today we focused on getting a few more things ready in the garden. Martin helped me lug the heavy sleepers in to place to get things ready for cherry planting. I will pick up a load of the necessary soil tomorrow or Tuesday and then the cherries can stretch their roots and get to know each other (I have a Stella bought and planted last year that I shall move and the Lapins purchased yesterday). Aponogeton distachyos – edible as well as beautiful, winter flowering and with a fragrance as delicate and rich (but different to) vanilla.

Martin also spent time getting Trevor up to standard for the job we had in mind today. He’s had a few problems has had the old Trev but when he works he is worth his weight in gold. Yes, he is run on fossil fuels but we are judicious in our use of him and hope one day to replace most of his uses with organic and natural methods. Slowly slowly. 🙂 Whilst Martin became a mechanic, I had the dubious pleasure of cleaning out Anna’s shed. Raking poopy and weed upon straw into a pile and then forking it into a wheelbarrow 3 or 4 times over is not exactly my idea of a good time but I have to admit I didn’t detest the job. I let the chooks and ducks in to Anna’s side of the pen to peck the grass and scratch in the straw which they thoroughly enjoyed and Anna came up for a chat and a scratch and then lay in the sun soaking up the rays. She is in much better condition now and putting on the weight steadily. Her milk has dried up although 2 rounds of mild mastitis assisted with that. Not exactly the method I would have chosen though but the end result is still good. We are talking about putting her back into kid again in a month or so which is exciting to say the least. 🙂 She is a sweet lady and comes trotting up with tail wagging for a nuzzle. She really does have such a sweet nature. So, with the funny antics of the ducks and chooks and the placid company of Anna, an unpleasant job wasn’t all that bad. And the sunshine was lovely too. 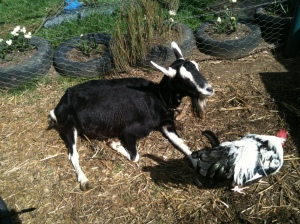 Sun baking. Can’t say as I blame her. it was beautiful out today. Oh, and one of the roosters photo-bombing.

As I took the first barrow load of straw around to the compost heap I noticed some green growing in there. I love our compost heap as I have managed to glean several plants out of it which is great. The garlic ends we’ve tossed in there have sprouted so I’ve planted them out before with success but this time the results of my compost diving were a little more spectacular. Back last Summer/ Autumn when I was bottling apricots I had a go at cracking some of the pips open as bitter apricot kernels are supposedly, in small doses, edible and also a natural cure for cancer. If you’re interested, please do the google research. If you plan to eat them, please also do the google as there are plenty out there who say they are poisonous too. The apricots we had were not bitter kernels but sweet, much like the almonds to which they are related. But I never made it around to cracking them all open and lost most of them to mould so they went into the compost heap. Several walnuts met the same fate after becoming lost in a plastic bag in the car for long enough to make them a little less than appetising. Well, upon digging to discover the source of the greenery in the compost I found them to be apricot seedlings! 😀 Waste not want not and out they came. I also discovered in my compost fossicking that the walnuts had also sprouted but had not yet reached the surface to provide greenery. Out they came too although I know they dislike their roots being disturbed. Still, they can’t stay in the compost bin. I spent the next 30 minutes potting them up and as happy as Larry playing in the dirt in the greenhouse. We now have 7 potted up walnuts and over 70 (I think) apricots! I know! 70 right! Well, we can plant out some and share the rest! And even if only 1 in 4 survives, we still have enough to plant out and share. Nothing to lose but everything to gain. 😀 Chinese Water chestnuts. The crunchy sweet round bites you find in Chinese take out. They’re prolific bearers and I have heard that you can easily grow enough for your family in nothing but a bucket!

Anna’s shed was finished, sprinkled with ash (another use for the leftover wood ash from Ignisa is to help keep down the smell in the animal sheds) and laid with fresh straw. She should be nice and comfortable in there on her ‘fresh sheets’. 🙂

Martin in the meantime had his wood sawing station set up and started to chainsaw through the 20 or so trailer loads of wood he had gathered from the forest. We managed half a trailer load of sawed wood moved to the wood lean-to before I had to snaffle the trailer to go and collect some rocks from a friend. We’d made a trade on rocks for logs as he was after a few long poles for adding further roofing to his dog kennels which was more than a fair trade to me. 🙂 I came back with the equivalent of a large wheelbarrows worth which now line the edge of my pond. By my reckoning I need another 3-4 wheelbarrow loads of rocks to finish lining the top shelf of the pond. Yes, we have gone about it backwards but when one is impatient and insufficiently cashed up. 😉 Whilst we were gone he put on dinner and started collecting this weeks wood supply to burn to keep the kids and I warm throughout the day although hopefully we can let the fire go out during the days again this week and conserve our wood supplies somewhat. I know how hard Martin works to ensure the warmth and comfort of his family so I don’t like squandering the wood.

Now with kids in bed and Martin finishing off the wood and packing up Trevor, I sit here on the couch, heatpack on my aching back and pretty much unable to move. I’ve not done by back or anything like that (or at least I hope I haven’t 😦 ) but I do ache like fury. I’m hobbling about like an old old woman, complete with shakes and all. Time to grab the knitting out methinks to complete the image. 😉 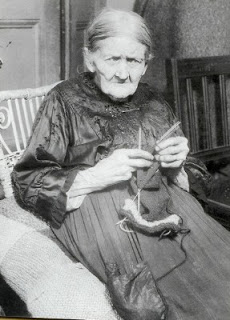