It has been all systems go the later part of this week and the weekend. And we’ve achieved heaps. 😀

Orik made a serious and frightening bid for freedom on Wednesday, highlighting to us the need to get our perimeters in order so as of Thursday morning a mate has been putting in posts for fencing. Hopefully we get it finished today and we can then rest assured our littlest man will not be able to go off exploring again. 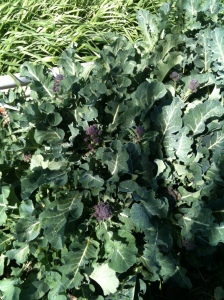 I went to pull out the broccoli that had done nothing in nearly 12 months and discovered it had finally flowered. Lots of tiny heads but dozens of side shoots. And shoots n the shoots.

Allegra also had an accident the same day, only a few hours later, tripping over with a bowl in hand, cutting her wrist open. The ambulance advised us to have it seen to at the hospital which meant the afternoon was spent running down to Bacchus Marsh as Ballan Hospital had a few bigger emergencies with which to deal. We had a return trip to the doctors on Friday morning too and return again last Monday just to make sure it’s all healing up as it should. I hope the appointment today is the last.

It’s all splinted up to prevent her flexing her wrist.

Fencing began on Thursday, continuing over Friday and Saturday with sinking all the posts. The fence running along the creek is not a straight line so it means lots of posts to turn all the corners. We wanted to fence in as much of the land as we could before the creek, allowing for an area wide enough to drive Trevor the tractor down to mow it if needed but other than that it runs fairly close. The wire and fence along the side was completed Tuesday which left the last little bit, dividing the front and back gardens to be done Wednesday. This section is in a straight line which makes it much easier and it’s also fairly level too. A nice easy finish I hope. Then the gates went on with secure locks to them and we’ve gained a lot of extra room in which the kids can play. They will love it and I get to relax (just a little) knowing they’re inside a safe space. I never want to experience a day like Wednesday ever again. 😦

2 of my 4 grape vines which will soon get wires on which they can run.

Whilst the fence was under construction, Martin and I worked on the front and back gardens. Martin focused on general maintenance, burning off and tinkering with Trevor the tractor who has slipped a belt and is being a pain to get a new one on. I wandered around both front and back gardens, also doing odd jobs and bits and pieces. I did fill one of my deck garden beds with compost ad planted out my Lapins cherry but sadly, my Stella which we planted last year has died so Mr Lapins was all alone there. I also got into the greenhouse, clearing out the mushrooms which have grown in there. I strongly suspect they are standard mushies and edible but there is no way I am trying, as delicious as they both look and smell. A mycologist I am not. Once cleared I planted out some spuds I had from last year (no idea what variety they are – a lesson to ALWAYS write down what you plant) and I planted some beans (Violet Queen) in there too as well as along the front deck too. They will climb the deck rails and the cherry trees. 🙂

2 more trees planted since this photo was taken and the deck is completely cleared too.

Sunday however was the big day of excitement. Last weekend Lee our kitchen builder came over to measure up for our large wall storage cupboards and today was installation day. At 8am we were rearranging boxes (still unpacked for lack of appropriate places to unpack them into) and trying to pile up furniture and children eating breakfast into some semblance of order and organisation (which we somehow almost managed 😉 ) and in came the cupboards, tools, drawers, plinths and more. Allegra, Orik and I packed up and shipped out on a shopping trip to let them get on with it and Martin and Jasper planned to finish fixing Trevor and chop and move some wood. We headed off firstly to Spotlight for the necessary yarn to finish the jumper I’m knitting for Martin, (here is the pattern)then on to Bell’s Water Gardens for some inhabitants for our pond which will help maintain the balance in there of nutrients and such without the need for filters and other powered gizmos. Then on to Newlyn Antiques and Nursery for 2 more cherry trees, replacing the Stella which is a universal pollinator. I also bought a Black Boy cherry and the 3 will be espaliered along the deck. In a few years time we should be able to sit and pick cherries from our front deck. It doesn’t get any more local than that! 😀 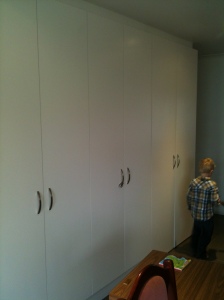 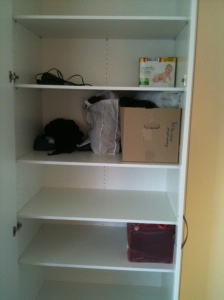 Storage cupboard. Currently full of boxes of fabric and such. I’ll sort through it later but for now out of sight works well.

A place for coats and more storage.

Home again with a timeline on our fish in bags (there is only so much oxygen a bag full of water holds) and then gently into the pond they went. The kids thought they were wonderful. The fish are comets and whilst I would have liked native fish I bow to the wisdom of Richard from Bell’s as they have tried native fish but they all die over the icy winters we have. They survive in the wild by burying themselves in the mud f which our pond has precious little. Allegra wanted a pink fish so we got some of the pearly white ones which could, in the eyes of a little girl, be viewed as pale pink 😉 and some black ones for Jasper which of course cannot be seen in a pond lined with black liner and some orange and multi-coloured ones too. 😀 Some will hopefully breed over the summer (they’re of breeding size) and others have some growing to do first. It’s exciting to see them swimming around in there. 🙂 The pond will hopefully soon attract the frogs we hear “bhok bhok bhok” down in the creek and I know we’ve found enough of them when we’ve moved things in the garden so I hope they come and live there soon. I need to build up their habitat a little more yet though. 🙂

It is all coming together well out there now. 🙂 The woodpile is somewhat smaller although it still needs much done but we’re plodding away at it. The pond is looking good although it does still need further planting out and rocking up and the raspberries have green leaves bursting out and all is coming to life. The front deck is also completely cleared and looking much better after a jet-washing which has removed a LOT of the gunk and muck on it and with another jet-wash and a varnish up once dry it will look almost as good as new. 🙂 The back deck, once cleared will receive the same treatment. 🙂 There is still so much more to do though. More compost to bring in, more garden beds to build as either hugelkultur beds or straw bale to see us through the year, seeds to plant, both direct and in pots and soil blocks, trees to plant out and trees to chop down. It is all very exciting but almost overwhelming with all we need to do. And I have some boxes of fabric to unpack into my spanking new cupboards too. 😀

It’s a hard life being a kid. Flaked out, face down on the couch, feet still on the floor.