It’s rather soggy around here at the moment due to a fairly substantial amount of rain (17mm this month) that has been falling this week. Aside from the gale-force winds and sideways rain the weather has been simply delightful. 😉

I found this growing up underneath a seedling tray in my greenhouse.

Today though the weather has improved dramatically. It has rained a little on and off although not enough to do more than frizz up hair for those locks are affected by dampness and certainly not enough to stop us from enjoying the more than intermittent sunshine. 🙂 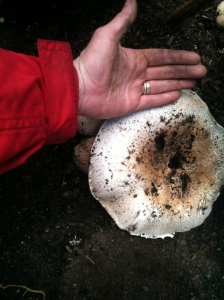 Not all that small. (Pardon my dirty hand.)

I’ve been itching to get back out in the garden again as Spring is singing its siren song loud and clear and I am desperate to listen fully and dive into the depths of soil and seeds and seedlings. 🙂 So this morning, once we were all fed and dressed and watered we headed out into the front garden.

I only wish I KNEW if they were edible. I suspect they are as they’ve grown in commercial compost (surely made using some mushroom compost) with nothing from the outside except some poplar branches and I’ve seen no mushrooms on our block except here. They often have small black curly hitch-hikers inside too but what is toxic to me may not be toxic to a millipede I guess.

The fence works continue apace although they have had to be paused until trees are chopped down which, when the wind is desperately trying to flatten all in its path, is an extremely risky venture. So with tree lopping out of action and fences on hold until trees are lopped we moved on to building raised beds. Normally I would just whack it together but this bed was going to require more skill and strength than I alone have and more time than Martin can spare on a busy weekend when we both have long lists to achieve. The ground at this point lifts about 30cm give or take so I decided to terrace it slightly and add the raised bed edge on top of the terraced step-up which has one bed approximately 60cm off the ground. VERY comfortable to sit on the edge of and garden. 🙂 It’s had the plastic dug out from underneath and is now ready and waiting for some lucerne, compost and soil. 🙂

Raised bed built and read to fill and plant. Tomatoes this year I think and then maybe a ballerina style apple or a small plum (is there such a thing?) in the middle. Mulch required for the paths as the pavers will be relocated.

In between the showers yesterday I planted a few seeds out in the asparagus bed. I’ve popped in giant Russian sunflowers, nasturtium and some cos lettuce too which is all an experiment to see how they grow together. There’s nothing to say they won’t and don’t but then again they may not be the best of friends either. I planted some rainbow chard seeds at either end of the blueberry bed too. 🙂 Even if we don’t eat them, they look pretty, help shade the soil and hence act a little like a living mulch and both Anna and the chooks love the stuff. 🙂

The next garden bed all planned out officially. I have zero skills at planning on paper, can you tell?

Today Allegra and I added to the spring planting tally with watermelon seeds in between the raspberries as they’re on a hugelkultur bed where the raspberries will grow up and the watermelon will grow down along the sides of the beds. I also planted some tromboncino zucchinis along the back of the bed where the olives are planted, attaching some leftover scraps of fencing wire from which they can climb and hang their prodigious fruits. The idea of the melons between the berries came from a great webpage I found the other day. I’ve got dozens of great companion planting ideas from reading about their gardens and permaculture practices.

Raised bed built and read to fill and plant. Tomatoes this year I think and then maybe a ballerina apple or a small plum (is there such a thing?) in the middle.

I also planted some corn in the garlic bed and pumpkins in each corner and midway along each side. When the corn come up I will plant a bean at the base of each corn plant. The beans will climb the corn (ready-made trellis there 🙂 ) and they will fix nitrogen which will leave the soil fertile after the hungry corn is finished. Sadly the nitrogen is made available after the bean vine is done otherwise the corn would have an on tap fertiliser. 🙂 I know it’s a little early for corn and beans where we are as we are still getting frosts but I figure it’s worth a try. It will allow me to get the full corn season in but also allows me to continue to grow my garlic. It’s pretty heavily planted but I will hit up the seaweed solution a little heavier to compensate. Not entirely permaculture but we are getting a LOT closer. 🙂

Looking a lot clearer. 6 more to go and hopefully the 2 huge monster-sized ones up the back too. They are truly beautiful trees but they shade the garden too much, are considered weeds (they send out roots and runners and pop up everywhere) and we are hoping to coppice them (cut them to encourage regrowth)tr5 which can be harvested, in this case to feed Miss Anna.

I had been enticing Jasper with the secateurs too. He has been desperate to use them all week and today finally the weather meant we could get outside. We secateured our way through the poplar branches, stripping leaves and smaller branches off the ones we found to fit our task and then, using the same stretch cotton ties that Martin is using to hold insulation in place and that I used to tie on my fruit trees to espalier, we tied the poles into groups of 4 or 5 and straddled them over the path between the strawberry and raspberry hugelkultur beds. Not the most stable or the sexiest of teepees I hope it will do as we want it to and provide trellis support to the purple podded peas there. If the peas do well then each teepee will be covered in green leaves and purple flowers and pods in no time at all. 🙂  Jasper and Allegra both helped me plant the peas and also helped hold the “poles” in place whilst I tied them together. I hope they will feel proud (and hungry) when it comes to harvest time. 🙂 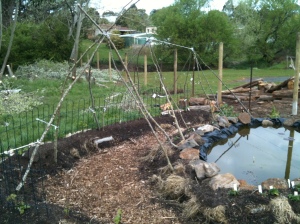 “Bean” trellises made from a few discarded poplar branches and a little knit fabric tie rope.

Not the sexiest I know but they will do for this years pea and we can make them a little more permanent if needs be next year. Maybe even a pergola style? That would be pretty.

A quick peep and water in the greenhouse revealed 2 lots of basil seedlings sprouting and coming up nicely as well as some gherkins which I look forward to them reaching transplant size and moving them to the asparagus bed and somewhere else respectively. 🙂 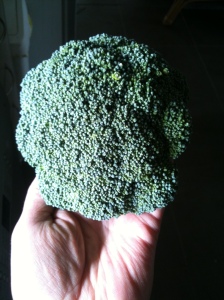 I also ordered some yacon rhizomes, also called Peruvian ground-apple, (Smallanthus sonchifolius) today from a seller on eBay. Yacon is an other one of the most curious and useful plants that seem to be sliding into our line of sight that hails from South America. We seem to have gathered nothing but the most obvious of the plants from the Americas – tomato, pumpkin, corn, a few berries and potatoes – and left the rest to slide under the gardening radar. Until recently. 🙂 Over the last few years chia has sprung onto the market, quinoa (keen-wa) and others too but yacon is seeming to be one of the next South American foods, more than likely to be touted as a super-food (aren’t they all these days) and it seems to be a good one for the home gardener, particularly those who are diabetic, interested in avoiding processed sugars or just after a new and exciting taste. It’s related to sunflowers and Jerusalem artichokes so it should be interesting at least and it does have a nice yellow flower too so something else with which to entice the bees. 🙂 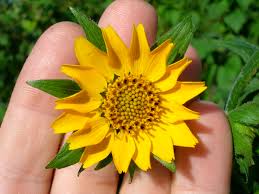 It is unusual in that it grows the tubers which are eaten and also rhizomes for replanting. Check out foodnstuff’s blog for her post on Yacon. 🙂 I believe that from planting just 1 rhizome the resulting plant will provide enough rhizomes to grow sufficient plants to keep us in yacon all year long. 🙂

I’ve not tried yacon so I can’t tell you how it tastes but I’ve read that it contains a substance in it that is sweet to taste but indigestible to the human body which passes it out. Cool hey. 🙂 It’s supposed to be good to eat, much like a sweet potato or raw and grated on salads and such, can have the juice squeezed out for a refreshing drink and the juice can be boiled down to a sweet syrup and even into a sugar-substitute. Excellent! 😀

Ok, chickens are not the brightest of creatures on this earth. I’ve just heard a noise down the hall which I was unable to blame on my 3 children (they were all in the room with me 😉 ). The thought sprang to mind that the chooks might be responsible so I poked my head in the laundry to check. Not 1, not 2 but 3 of the silly birds, 2 hens and a rooster all desperately stuck behind the glass door trying to climb through the glass to freedom. I tried to grab them and put them out but it frightened them even more and they tried harder to escape through the glass. David Copperfield they are not and my foot eventually guided them each to the relative freedom of the garden. 😀 The reason I used a foot? It kept their wings further away from my face. 😉

The silly creatures making a mess on my back deck.

Well, it’s time to think through dinner here (eggs given we have 3 dozen at the moment which is pretty good since we only have 6 layers and 2 are silkies who don’t lay heavily at all) and to try to get some more knitting done. I’m working on a raglan top-down cardigan to wear to my cousin’s wedding on Saturday but I don’t think I will get it finished in time sadly. I can’t use the knitting machine either as the needles I’ve used are too large even for the loosest of tension on the machine :(. Oh well.

Tomorrow I hope to plant out my 9 walnuts I found sprouting in my compost a few weeks back. They don’t like being transplanted so I don’t hold the highest of hopes for them surviving but I lose nothing but a little time and effort if they don’t make it but gain a valuable resource in years to come if even just 2 or 3 of them survive. 🙂

A quick update on Anna. It seems that we had a little species issue in our breeding plans. William believes he is a horse so of course (of course) he is not interested in a goat. I hope to be able to return her to her previous owners next time she is in heat and breed her to their Boer buck.

11 thoughts on “Gardening between the showers”