Another weekend over and another heap of things still to do but also things achieved. I swear the to-do list never gets shorter but then again we do keep adding to it. 😉

I spent some time in the front garden, filling up and planting out my triangular garden bed. The Triangle bed (as it’s known) is home to my yacon. I’ve mentioned yacon before and had planned to plant it out in the odd-shaped garden bed but as it’s not yet built and the yacon is sprouting I decided to change plans and plant it where I could. Due to the extra depth of the bed I used a bale of straw, heavily coated in blood and bone as the base layer before topping off with a good thick layer of purchased compost.  I stuck the yacon in and after a really thorough soaking I mulched well with sugar cane mulch. I also mulched the asparagus bed which also houses sunflowers (a close relative of yacon) and nasturtiums this year. I have more mulch with which to give the strawberries and raspberries a layer too that I hope might give their beds half a chance of holding in some moisture. At the moment they’re drying out chronically fast and the soil is simply blowing away on days like today. A good top up with compost and a heavy watering with a good layer of mulch will hopefully keep things in place and stable until all the strawberry plants establish. They then will stabilise the bed beautifully.

One minute he’s running around and then…

This morning involved a trip to Bunnings. After our usual alarm clock wake up after a thorough sleep in (being kicked in the face by a small boy and admonished “hey!” before 7am (but after 6:30) constitutes alarm clock sleep in 😦 ) we upped and got at ’em and headed out for breakfast before Bunnings. I had some birthday vouchers to spend which made it a lot of fun! And the kids were on good behaviour with the promise of Bunnings playground too. 🙂

He just put himself to sleep! My funny little snuggle-bug.

Jas and I hit up the garden centre where I was pleasantly surprised to find my Feijoa plant. If you have the space and want a thoroughly hardy, drought tolerant, ornamental and practical tree/shrub with both edible flowers and delicious fruits then you can’t go past a Feijoa. I grew up with one in our garden and they are truly delicious. It’s not a fruit you will often find sold commercially as the fruit doesn’t last once it’s ripe but I highly recommend planting one for its prolific fruits. I’ve put one (protected by wire) in the back garden. The chooks have already done their best to dig it back up but I’m hoping the blocks dumped around the base will dissuade them a little longer. Once it gets a little bigger (they reach 4.5m x 4.5m) then they are welcome to do their worst. 😉

With our rather nasty frosts I may well need to offer some extra protection during the very cold nights to the passionfruit vine I purchased but I’m hoping the fact it’s being grown next to and will be trained over a water tank might offer the extra thermal mass required. I hope to get a second one or grow one from a cutting to grow over the shed water tank too. 🙂 Pretty and useful. 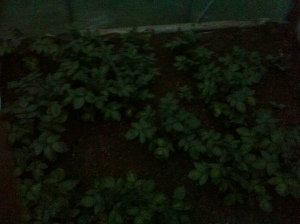 Terrible lighting (iPhone photo taken at dusk inside the greenhouse) but my spuds are doing well in here so far. I just hope it doesn’t get too hot in here for them over the summer months. Time to mound and mulch them up.

I also grabbed a Jasmine vine (yes I know they grow readily from cuttings Narf 😉 ) and some Thyme, the latter is planted beside its cousin Oregano, both as under story plants to the grapes. I figured that they’re all Mediterranean plants after all. 🙂 More herbs to come there. The jasmine will be planted to grow up and shade our front deck near the front door which will allow us to leave the door open in Summer and will also allow its heady scent to drift through the house. 🙂 It’s flowers, along with the honeysuckle I hope to plant beside it, will provide nectar for the bees I want to encourage to visit my garden. 🙂

Whilst I was planting out and mulching up, Martin was playing Daddy and trying to hook up our 3000L water tank to the shed roof. He’s more than just a bit of a star. 🙂 The kids had asked for a splash pool so with a tarp and a sandpit frame they were ready to go. Martin installed the tank pipes (no overflow pipe quite yet) just in the nick of time. Just as he finished is started to spit with rain! 😀 I don’t think today will bring enough to wet the roof, let alone run off but there is rain or showers forecast all week. I guess today’s 28ºC was just a teaser for Summer yet to come. There’s possible frost forecast later this week. 😦

The lambs are settling in well too. They wander around the garden, munching grass here, lying down to enjoy sunshine or shade there and generally keeping out of the way of the humans that share their space. They’ve quieted down too for which I am eternally grateful. Their bleating the first night had me worried that they would disturb the neighbours. 😦

The other project that’s on the go at the moment is changing over winter crops for summer. The broccoli are just about done now and I pulled up the last of the supermarket styled broccoli plants the other day which the chooks and ducks enjoyed immensely. The aphids had moved into one of them and the others were a while off having side shoots that could be harvested so I decided to call it  where it lay and pull them out. The sprouting broccoli are almost all in full flower now and I’ve been collecting the seeds when I can. The ones in the greenhouse will come out over the next few days to make way for some sub-tropical root plants I’d love to try. Even despite the heavy frosts I have a few ideas for keeping them warm over winter. I hope to try ginger, galangal and turmeric. The cauliflowers are starting to form up so I hope to harvest them in a week or 2 and there are 3 beetroot left in there too which will finish off the brassicas growing. I’ve been rapt with the purple sprouting broccoli and would plant them again in a heartbeat. Although they don’t grow a large head like the commercial broccoli (well, mine didn’t) they produced prolific small heads which made an impressive display and are also utterly delicious. No need to chop up into florets either, it’s ready to go. Perfect for cooking or serving raw as is with dip. 🙂 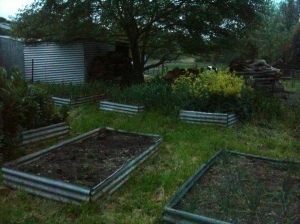 The yellow flowers are my broccoli in bloom. Pretty, even in the dusk light.

My marigolds are starting to emerge in among the garlic as are my parsnips and carrots among the potato onions. There’s no sign yet of the pumpkins or corn planted in one of the garlic beds but I expect to see them in another week or so. When they emerge I will repeat the same planting in the next garlic bed and then again in the 3rd one. And when the corn reaches a few inches in height, each will receive its companion bean, planted next to it. I just love companion planting. 😀 Pumpkins to provide a living mulch and corn to provide a trellis for the beans. The beans then leave behind nitrogen for the next crop.

Well, bedtime looms on this balmy October night so time to hit the sack. 🙂

17 thoughts on “Chooks and Bunnings and more besides”