If you ask a few friends of mine they would probably tell you I’m more than just a little obsessed with The Hunger Games. I’ve seen the films and read the trilogy… Twice. Actually, I’ve seen the films more than twice but let’s not delve into just how obsessed I am with the whole Hunger Games thing. Let’s just say that therapy might be a very necessary thing. 😉 In saying that, my obsession isn’t all bad. It’s been quite motivational really and very thought-provoking.

For those that aren’t familiar with the Hunger Games, it’s a trilogy of books written by Suzanne Collins, based in the futuristic country of Panem in what is now North America. Panem is made up of the Capitol and 13 districts. A revolt caused District 13 to be destroyed and every year, to keep alive the memory and consequences of rebellion, a male and female tribute, aged between 12 and 17 are chosen from each of the 12 other districts to travel to the Capitol and fight to the death in an arena every year. It’s much like Survivor, Big Brother and the ancient Roman gladiators all rolled into one. Katniss Everdeen who volunteers in place of her 12-year-old sister is the female tribute from District 12, the poorest and least respected district populated by coal miners and she must fight to stay alive in the 74th Hunger Games. The whole event, from the reaping in which the 2 tributes are chosen in each district, through presentations and interviews and then the games themselves are shown on tv for the enjoyment (and ultimate control) of the citizens of the Capitol and the 12 other districts.

It’s young adult fiction although I can say with 100% certainty that I am no longer classified as young adult 😉 but I thoroughly enjoyed reading and rereading these books. 2 paragraphs stood out though which I would like to share. They are from the 3rd book so for those that haven’t yet read it, it’s not exactly a spoiler but even so, you’ve been warned. 😉

The Capitol, like [District] 13 during the Dark Days, finds itself completely cut off from outside help as it holds the treat of nuclear attack over its enemies. Unlike 13, the Capitol is not in a position to reinvent itself and become self-sufficient. “Oh, the city might be able to scrape along for a while,” says Plutarch. “Certainly, there are emergency supplies stockpiled. But the significant difference between Thirteen and the Capitol are the expectations of the populace. Thirteen was used to hardship, whereas in the Capitol, all they’ve known is Panem et Circenses.” “What’s that?”I recognise Panem, of course, but the rest is nonsense. “It’s a saying from thousands of years ago, written in a language called Latin about a place called Rome,” he explains. “Panem et Circenses translates into ‘Bread and Circuses.’ The writer was saying that in return for full bellies and entertainment, his people had given up their political responsibilities and therefore their power.”

Ok, so we don’t send our children to fight to the death in an arena and we aren’t divided into districts that must send quotas of whichever part of the bread and circuses the capital needs but the similarities for me outweigh the differences. We do live lives of bread and circuses. We want our tv shows, our movies, new clothes (whether designer or cheap knock-off), our cheap bread, cheap milk, cheap gadgets and impressive houses. We have mortgages, overfilled wardrobes, food going off in the fridge and more.Whereas there are those in poorer countries that are the equivalent of the districts. Children in India pick cotton as slaves indentured by a debt they can never hope to repay, illegal immigrants who are hired to pick fruit or in factories and who are on paper earning a great wage but who need to pay for so many out-of-pocket expenses that their take home pay is pitiful, I’m sure there are factories where people work pushing buttons or packing boxes or feeding fabric through a machine in order to feed our bread and circuses. We are the Capitol population, ok maybe with a little less makeup and slightly less outrageous hairstyles but even so, we of the first world countries are of the Capitol. 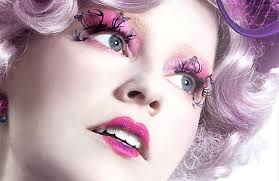 What would happen should there be an uprising?

What would happen to us if those cotton pickers and growers in India an those sweat shop workers in China and those illegal immigrants  picking fruit should all down tools and stop work? Ok, what if the other workers we have stopped working? The mechanical tools we have, the tractors and robotic production lines? What if we could no longer drive our cars and trucks to get groceries to the store and then to our homes? What then? We of the Capitol do have an expectation of the food we eat, the clothes we wear and of a standard of living. Who would pick up a windfall apple, cut off the bruises, or cut off the wormy or bird pecked half and eat the rest? Would you buy such an apple from a green grocers or the supermarket? Would you buy a limp carrot or a tomato with a black spot? What if the only clothes available had holes and stains? Would you buy them and patch up the holes or put a badge or pin or patch over a stain? Chances are in most cases that you wouldn’t. I wouldn’t. Expectations.

I’m not sure of the answers, nor indeed of the questions but I do know the whole Hunger Games trilogy has me thinking deeply as well as having entertained me very much. I really wanted to share that with you as well as some of the changes reading it has wrought in me. Aside from a new hairstyle I’m hoping to learn to shoot with bow and arrow, sufficiently so that I can hunt rabbits (for food, not pleasure – I can use a target for pleasure shooting!) and I can’t stop thinking about what the metaphorical Hunger Games represent in my life. Where does my life fit in? All sorts of assessment of myself an the books and deeper meaning. I guess my English teacher would finally be proud of my analytical skills, although I’m sure I’d not get higher than a B+ but even so, I am able to look behind the story and ask the questions. Proud Ms Rix? 😉

And me attempting to do the same

In summing up, I highly recommend the Hunger Games, books or films or both. 🙂

And may the odds be ever in your favour. 😉

Shooting with a friend – I’m shooting with yellow fletching. Our revised target, about the size of a rabbit and We’re both in the kill zone!

Spanked by the string inside my elbow for holding the bow incorrectly. No new bruises as of last night though. Improvement!

22 thoughts on “The Hunger Games – a review… Of sorts”