Well one of my friends can today say that I do indeed have their goat. Literally. I’m more worried we’re opening up Pandora’s box to be honest. 😉

Goats are companionable creatures and like a friend of the same species, preferably same breed to keep them company. Miss Anna, our lovely British Alpine has been alone since coming to live with us until October when the lambs came to stay. She did, once the pecking order was established, settle down and enjoy their company. All 3 share their food and snuggle up into a hairy woolen pile at night. However, with the grass coming into its no-growth period and the grass left available obviously being the least desirable grass for the lambs, the time has come to move them on. Yes, they are still young and hence still quite small but it’s a balance between size vs feed costs.

Anna would have once again been alone.

No longer. Today was the day for Miss Pandora, the daughter of my friends milking goat and Makka-Pakka, the father of Anna’s stillborn twins, came to live with us. Within seconds of arriving and being let out into the goat pen she was covered in blood, not her own thankfully although it gave me quite a scare none the less. Miss Anna has knocked off a horn stub which was bleeding a little. As she made it known that she is top goat in this pen she left blobs of red all over Pandora’s white coat.

I’ve had to put the lambs in to bed early too as they decided to add to the general cacophony around here by bleating in reply to Pandora’s calls for her mother. 3 bleats, each in different pitches, accompanied by the general noise of my children and Miss Anna’s Mweh Mweh thrown in for good measure. Thank goodness the roosters are no more or the neighbours would lynch us! 😉

Oh, and funnily enough, contrary to what I learned as a child, goats actually say baa and sheep say maa! 🙂

Pandora has had a small bottle of milk – and has settled down somewhat in her new home. She will need a bit of bottle feeding before becoming a big girl on the forage and feed our goats and sheep get but in time she will become a milker too as will Miss Anna in 2014. Pandora is Toggenburg Boer cross, so depending on with which breed buck she is bred we have the option for kids for milk or kids for meat. Her mother is from an unregistered but very good milk lineage so we have high hopes of her milking well. Even should she inherit more of her paternal milking genetics she should still provide more than enough for our needs and, with milk from Miss Anna, hopefully enough for my cheesemaking too one day in the next few years. The possibilities are exciting. 🙂

Anyway, enough of the dreams of the future. Here is lil Miss Pandora. 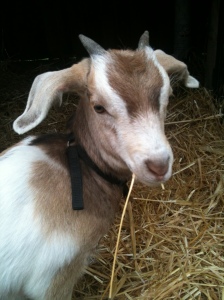 Eating the new straw bedding laid down in the shed.

Look at those lovely floppy ears. 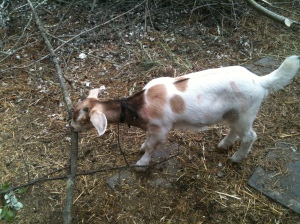 It may not be entirely true that goats eat everything but she’s doing her best to dispel the myth. Eating the bark off the poplar branches, and not even the nice fresh stuff.

She is about the size of a medium-sized dog at the moment and her little horns are not more than an inch long. We’re keeping her horned as that’s how she would be in nature and we’re hoping to train her to walk, guided by them and any headbutting will be strongly discouraged.

As I type I can hear her bleating her little heart out, crying for mum I guess but I know she will soon settle down. Had she not come to us there is a fair chance, given her mixed blood lines, that she would have been deemed fit for mowing or for the freezer so, despite feeling like a right old meanie at the moment, I know she will have a good life with us.

Oh, and because I promised a photo, here’s my garlic braids. 🙂 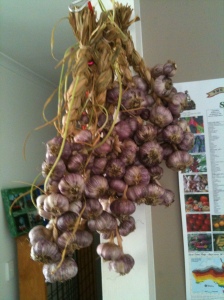