Wow, it’s been ages since I disappeared off-line. Nearly a month! And no, I’ve not been without a laptop that entire time but it has taken some time to get things up and working again. Not that we’re there entirely yet either. 😦

When my computer took its final dive from its precarious perch to the tiles below, smashing the screen I groaned as I hate changing technology even more than I hate being offline. Nearly a month on and I am still working on getting all my RSS feeds, old emails and contacts onto this computer but hopefully this weekend I can press my technically minded husband into getting it done ( I wouldn’t have the foggiest 😉 ) which means I can follow-up my Pip Permaculture competition winner and arrange that subscription (I’ve not forgotten Simone and I’m sorry for the lack of follow-up but your email is on my old computer) as well as several other pending emails.

I actually had my new (second-hand) laptop arrive within days thanks to eBay and a proactive husband but then our ISP crashed and we had 4 full days of no internet, followed by nearly 3 days of no email send-ability. Coupled with 2 long weekends in there for Easter and then Anzac Day plus a 2 day migraine has meant it’s been very busy offline around here.

Actually there has been a LOT going on, some of which is worthy of its own posts but I’ll summarise here to catch you up.

You may remember back in October when we picked up our lambs, intending to use their lawn mowing services until the time came to process them for meat. Well, that time came and on the Sunday of the Anzac long weekend (27th April) our lambs met their maker. In order for full accountability I had a friend come to help me who has had abattoir experience and with me as his assistant we dispatched then hung, skinned and gutted our 2 sheep, one at a time. It was not easy in the slightest and I will never forget that day as long as I live. Taking responsibility for one’s decision to eat meat is a heavy weight I will say and one I feel obliged to carry. Their carcasses hung for 5 days before our friend came back to help me to butcher them into cuts of meat for the freezer. I then spent the rest of the weekend beginning the long process of rendering down the fat (tallow) to be used for soap and candle making and turning the scrappy meat into sausages. We have mint and garlic sausages and garlic, sage and dried apricot ones in the freezer along with roasts, chops, the bones (for bone broth soups) and shanks galore. So far I’ve rendered 1.3kg of tallow and I have at least 2, if not 3 more kilos to finish. Lots of soap!

Jas was most keen and very helpful cutting fat off the meat destined for sausages. You can see sheep 1 behind me, wrapped in the sheet.

Cutting the carcass of sheep #2 into butchers cuts. I’ve learned the value of an ultra sharp knife as well as the right knife for the right job.

Rendering down the tallow in the slow cooker (the wood and electric stoves were full).

Did you know you can sharpen a knife on the bottom of a coffee cup? Nor did I until a friend told me. It took a while but it gave me enough of an edge to keep using this knife at least.

Making sausages by hand. The bowl at the back is the pieces too sinewy to mince well which the cats are thoroughly enjoying.

We also had our first frost of the year on Anzac Day (25th which meant there were the last of the tomato plants to pull out, yacon to harvest, 3 zucchini plants to strip and a few other bits and bobs of summer crops that had still been hanging on. I ended up with about 6kg of green tomatoes, mostly cherry tomatoes AFTER I’d given away 1/4 and ripened about 1/2 of them in the pantry. 🙂 They are now made into a green tomato salsa which has been most delicious on corn chips with melted cheese. 🙂 The yacon boasted pretty much nothing but that was a brand new straw based garden bed and I think I ended up with nitrogen draw down by the straw. It is all nicely composted but the yacon were a dismal failure. I ended up with a handful of tubers no bigger than my fingers 😦 but I’ll try again next year. I think I have some of the corms to replant in there too. I hope so. The zucchini plants were great and from the 3 plants I had we grew just slightly more than we could eat. My kids are most grateful for no more ratatouille but I will miss it. We have 1 monster zuke about 60cm long and likely 15cm at its widest point with which I need to do something. Unlike my mum I won’t torture my kids with zucchini soup. 😉 Likely I’ll harvest the seeds then grate the monster into manageable portions to hide in different meals over the year. 🙂

This was on Thursday 1st May. Well iced over and very cold.

Most of the garden beds are planted out now with winter crops. I have just 2 more to go. My sunflower beds is cleared and I have a large tub of sunflower seeds (needs winnowing to clear out the husks) and still I have flowers drying. That bed is now showing that the wild fairy dance with dried rainbow chard plants covered in seeds that I did a while back was fruitful. 😉 Lots of inch high rainbow chard seedlings are waving their cotyledon at the skies. :)The potato onions are sprouting although we have a small magpie problem in the shape of about 7 large specimens who are pulling out my newly sprouting onions to dig for worms in the holes left behind. 😦 Frustrating but it did mean a friend took home a large double handful of potato onions to plant out. 🙂 The garlic are coming up too and I have some early broad beans showing their first leaves as well. The flowers are frost sensitive but last year they seemed to present no problems and we had a bumper crop. 🙂 My radishes, turnips, various brassicas, spinach and peas are growing at various stages and my compost pile is looking impressive with a trailer load of manure and a wheelbarrow load each of rotted pond weed and fresh pond weed as well as kitchen scraps the chooks and goats can’t eat. I have also a large stash of cardboard to lay flat after I poison out the poplar saplings and dock plants everywhere. 🙂 I even have some spuds trying to grow from the green ones I threw in the compost pile. It’s destined for spuds in Spring anyway. 🙂

My worm farm is also doing well. There are thousands of tiny baby worms and the small to medium-sized worms are now all huge fat ones. Whilst digging to see how they were going the other week I even found a couple tying the knot. I didn’t get a photo but just imagine 2 worms each crawling under the band of the other worm. It was very interesting. 🙂 I used 4L of worm wee inside the greenhouse the other day too. Lovely jubbly. 😀

I also decided in the midst of the last over full and busy month to make beer and cheese. I found an old unused stock pot we’d bought way back in our camping days and left in the camping pile but it’s now a brand new and much-loved and well used kitchen stock pot now. It might be just a wee but small for cheesemaking though. 😉 I also had a go at making beer. Sadly with not just mine but Martin’s computer out of action (yep, I dropped that one too 😦 ) I had no way to watch the video and I struggled somewhat with the various dribs of information spread between 3 different instructional points. I think I figured it out though and I have 36 (I think) bottles of beer I bottled up the other week. It definitely tasted like beer anyway. The bottles are feeling very full and taught so I hope that means that they’re nice and fizzy and beery for Martin when he opens one this weekend (the 2 week mark). Gav, if you’re keen for a willing helped next time you make beer then give me a call! 😉 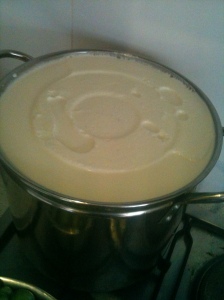 A 7.5L stock pot I think. I made about 7.2L of milk into cheese and had to ever so slightly reduce and modify the recipe. 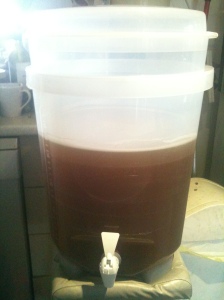 Mmmm Beer! Ready for sitting and doing its thing in a warm and child-proof cupboard.

Allegra has also started her dancing again this term, this time at the local community centre which is within walking distance. So far we’ve not managed to walk up but being local means a lot less fuel at least and no massive hill climb from Bacchus Marsh to Ballan which is a killer on fuel consumption. 😦 After dance, and a mere 15 metres down the hall is the Ballan library and storytime which has been good for the kids. We now have a library card and borrowed out a book each for the week. This Wednesday we read last weeks books and the older 2 kids did a drawing each of their stories. Book reports for 4 and 5 year olds! 😀 A coffee at the local cafe with old and new friends afterwards before heading home completed the day. This week we also did some banking in there. Dancing, storytime, banking, butchers shop then coffee is a wonderful morning. 🙂 I like Wednesdays. 😀

Bottling tomatoes was also on the cards. Martin picked up 50kg of tomatoes at the Laverton market as per request as well as 20kg of mandarins, 10kg of  apples and also 10kg grapes that were unexpected. The grapes are now bottled as juice, the mandarins are 3/4 bottled as pieces (and they take AGES to peel then pretty up by removing the pith bits) and we’re eating the rest until I get around to peeling and bottling them, the apples are being demolished by a small child with a big appetite and the tomatoes are pretty much all bottled too. The pantry is looking good!

Pretty pantry of put up preserves. Nearly full and almost out of jars.

And the overflow of things I want to keep, beer and preserves that won’t fit int he other cupboard, plus the last of the empty jars (the big ones are 1.2L and for juice) plus Kombucha. Oh, and my monster zucchini too.

All in all it’s been a tremendously busy month. It’s been hard to motivate myself the last few days but I think I can live with that. We’ve got another few busy weekends coming up with roosters that are waking up Ballan with their crowing wars and also with a garden bed I need to top up so I can plant garlic. Busy once again of course. 🙂

So hippies, what have you been up to this last month? What plans for the weekend? 🙂