We finally had our back yard mostly de-poplar-ated. 😉 There are only about 6 or 7 poplar stumps inside the back garden and none out the front although certainly there are more on our property, just across the creek now. Still, most of the main ones we wanted gone are GONE! 😀 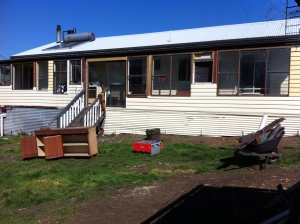 Another view of the back deck.

An ad in the window of either the local take away place or the supermarket sent via Martin one morning on his way to work gave us info for a local bloke, Peter who has a digger and services for hire. A phone conversation, a couple of visits and finally a cleared garden ready for excavation meant that Saturday morning saw the arrival of a 6 tonne digger onto our little slice of paradise. 🙂 6 tonnes! I tell you I was so nervous that we were getting one of those massive construction site behemoths but it turns out they are MUCH heavier than they look and the digger is about a similar size to Samson our Delica people mover. Much relieved little hippy here I can assure you. 😉 Anyway, with its engine purring, Pete drove his digger down the drive and across the back garden and once again out into the front garden. Despite assuring us he had a soccer game to coach, Peter couldn’t resist pulling out one stump before he left. He assured us it was because it was so close to the fence-line garden but I reckon he just wanted to play with his big boy digger toy. 😉 Fair call really. It looks fun! 😀 Anyway, with much soil dug up and multiple attempts to find the root holding the stump in place, the stump lost the battle and was extracted, with delicacy, from what was once jokingly called, the front lawn. 🙂 It would be a farce to call it thus now. It’s a mostly flat area of soil and mud with a channel cut through to direct the water that stands in a hollow each winter down towards the creek. 🙂 The rest of it is ready to dig holes, plant trees and build up garden beds and hugels, so all good. 😀 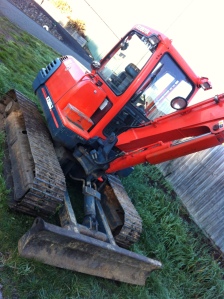 In my driveway at 7:45 on a Saturday morning.

Tracking across my back garden.

The back garden had several severals worth of stumps to pull too, some much smaller and harder to access but no worries says Pete! He took out about half of them including one he feared had broken his digger arm which we were out buying fruit trees. Currently I am the proud owner of a large area of rather bouncy clay mud. It’s well weird! It’s like a thick rubber base at a children’s playground. Looks like it’s holding a LOT of water. That’s good… I think. 😉 I also own several very large piles of gnarled roots and splintered stumps and look to score another pile or 2 of those before we’re done. Firewood for years there (softwood so we can’t burn heaps of it at a time). And to the kids delight there is a LOT more mud in which to play. My washing machine and I aren’t quite so happy about that but there you go.

A long view of the (mostly) clean garden. 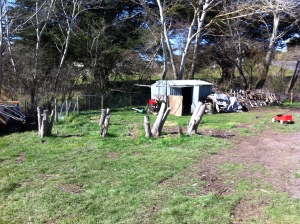 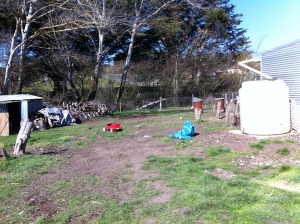 This morning saw the family and I all headed out to Newlyn Antiques which has a lovely fruit nursery of bare rooted and more advanced potted fruit trees. I kinda sorta spent a fair bit. 🙂 I do however, now own a Gravenstein apple, a Cox’s Orange Pippin apple, a Pink Lady apple (my favourite apple so far), another Cosford hazelnut, 2 more grape vines (I need about another 8 or 10), a Moorpark apricot, a Nijiseikki Nashi pear and 3 other apples whose names escape me at this moment. Along with 2 other pears I purchased last week and my seed grown almonds I am happy with what I hope to be planting out this or next week. 🙂 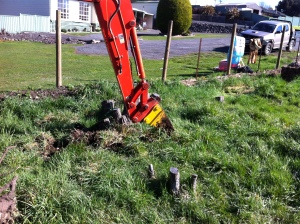 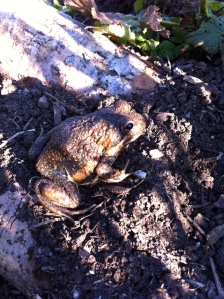 A survivor of the carnage. I released him up near the pond. Pete tells me he’s a toad. Does anyone know?

The weeding I got stuck into yesterday. No before photos but now there were several small thistles, many wild lettuce plants and several varieties of grass too. The garlic is much happier although the worms are less so. 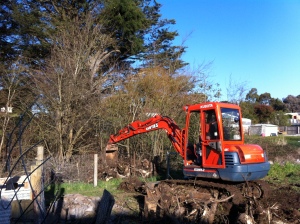 Stumps over the fence. Still our property but the lesser used parts thereof. Zone 5 perhaps? 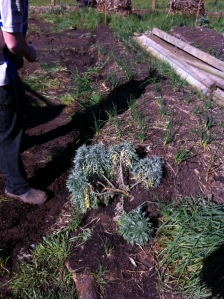 Clearing right up to the hugels edge. My heart was in my mouth but the man is a master! 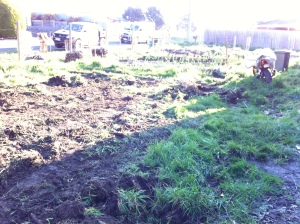 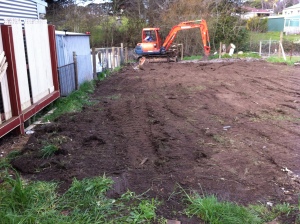 Crushing the old, broken roof tiles for a driveway. 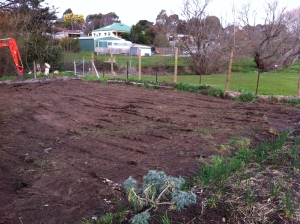 My front garden now. There is a slight swale cut in here which will be highlighted by the hugel beds I intend to build. Bring on the manure and lake weed! 🙂

IF my back is up to it. Yeah, I put my back out on Saturday morning with all the soil shovelling, weeding and picking up of stuff. 😦 Remind me to take it easy? 😉