Still, it’s definitely not been all bad. As I’m having a few challenges stringing my words together today (not hung over 😉 ) so I’m going to copy what I saw on the Suburban Jubilee blog (a wonderful blog about frugality and sustainability) and share some of the things we achieved this year in photos. 🙂

We tried breeding Anna but with no success so it turns out. 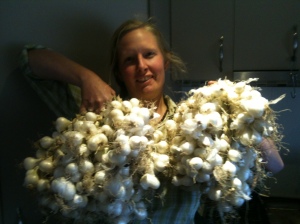 We harvested our potato onions with great success. 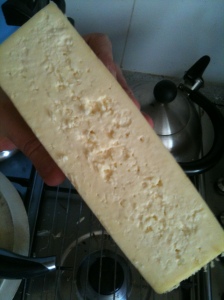 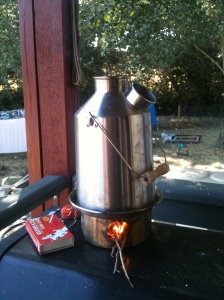 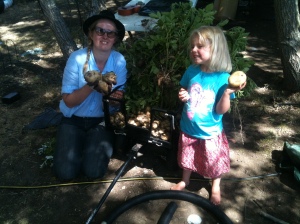 Our potato harvest. We lost a lot to green (a potato with any green is poisonous) which we threw into the compost area. The chooks won’t eat raw potato but they scratched everything else into lovely compost and those green spuds became this years seed potatoes and they are growing like topsy. 🙂

My beloved Nanna passed away February 15th 2014 at just over 92 years of age. So much of what I do now she has done before me and I only wish I could have told her about my sewing, knitting, bottling, veggie gardening and more before her memory went. I miss you Nanna but I know you’d be proud of what we do. 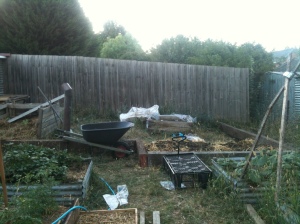 March saw the revamp of the veggie garden, removing the raised beds and putting in tile paths and a terrace. We imported manure and lake weed from Wendouree in Ballarat and fenced it off for the chooks to work over. 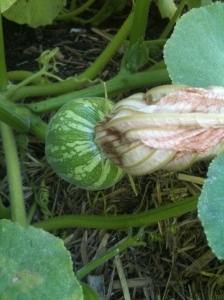 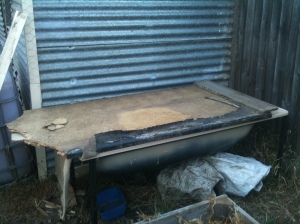 We finally set up the worm farm, a bucket underneath the plug hole which we blocked off with wire mesh and gravel to allow all liquids to drain easily. We filled it up with more lake weed, some pea straw mulch scrounged off a now defunct garden bed and ageing (no longer hot) manure. Our friend S donated a 2L ice-cream container of worms from his own worm farm and away we went.

In April we had a shot at building a rocket stove. Although we never finished this one it worked a treat and boiled 1L of water in 8 minutes.

I had a go at making soap at home for the first time.

Ballan is surrounded by seed grown apple trees, all likely sowed from the apple cores thrown out car windows. These were turned into apple juice. 32L of it. We still have several litres remaining.

In May we raked the local park clean of its fallen leaves. 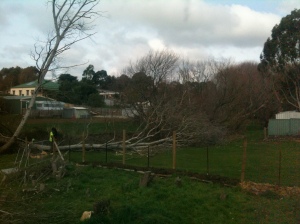 We brought down the biggest of the poplar trees on our property too. 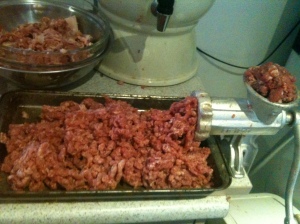 And we got stuck into learning about all things lamb meat.

In June we saw the first of our cabbages growing well.

And moved onto phase 2 of the vegetable garden overhaul. 6 months ahead of schedule mind you! 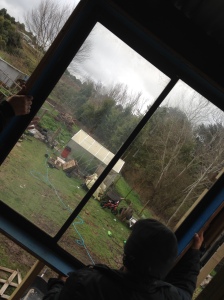 In July our builder J started to enclose our back deck into a passive solar greenhouse using windows taken (with permission) from a house earmarked for demolition.

We also started to install our rocket stove.

In August we hired an excavator to come and pull out all the poplar tree stumps and level out the gardens.

We saw some warm enough weather that my kids stripped down and ran out to cover themselves in mud. Several times!

We started planting out the deck area with rubbish bins turned into wicking beds. 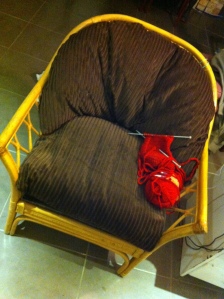 Our couch covers reached the end of a long life so I purchased some corduroy fabric and started sewing. All the couches have new covers and look so much better for it.

Finally in September we got our solar panels installed. Sadly it took until the end of November before the smart meter was sorted out and we could start to reap the benefits.

We harvested our cabbages and turnips and got stuck into fermentation too.

The kids helped to turn our garden into more of a kids paradise in October with the building of our sandpit and the platform above it onto which I installed their cubby house. 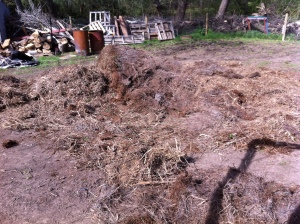 We arranged for 3-4 bales of very old and rotting hay to be delivered which was spread out to mulch an area designated to become the hugelkultur orchard.

In November our lovely Silky hen Dandelion hatched out 4 of the 5 eggs she sat. We now have 4 Isa Brown X Barred Plymouth Rock chicks. It appears 2 of them may be roosters if the sparring I saw last week was any indication.

And now it’s the end of the year, December once more. It’s been a busy time for us with all manner of things going on which is why I’ve not been very present in the blogosphere. We have not been idle though. Here’s just some of the things going on around here. 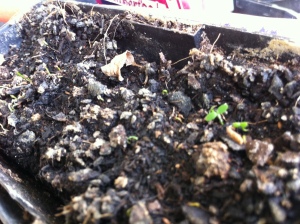 Blueberry experiments. I have grown these from seed that I saved from frozen blueberries. 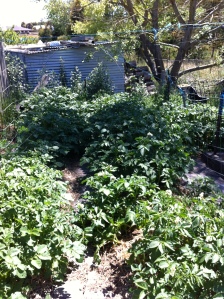 Potatoes that mostly came up from the green potatoes we threw in here last autumn.

Hops vine going crazy. My neighbour assures me it’s a male vine though. As I grew it primarily for its shade I am not too concerned. 🙂 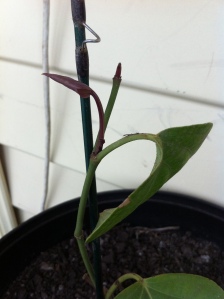 Piper nigrum AKA black pepper. 🙂 And green pepper and white! It’s all from the same plant at different stages of ripeness. I bought this months ago where it sat and did absolutely nothing all winter that I could see that is) until about 3 weeks ago when it warmed up sufficiently for this tropical vine.

Meet my baby pomegranates grown from the seed taken from a supermarket purchased pomegranate. Food forest plans for these babies in a year or so. 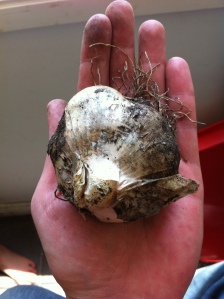 One of my larger garlic bulbs. I thought last years garlic crop was awesome but this years blows it out of the water! AND 5 weeks earlier than last years too!

Excuse the (ever-present) mess. See our new pergola? Well, old/new one I should say. Thanks again to that house marked for demolition. We will finish weeding underneath and then fill it with gravel, sand and pavers.

One of our fruit harvests this year. We had a few cherries lost to cherry slug but as these are right up against the front deck the birds don’t bother them. We had a handful to enjoy on Christmas Eve and this bunch are ripe now.

Thankfully the whipper snipper never touched the 2nd year cane. It’s the fruiting one and absolutely laden! We’ve had a few berries each and likely some more are ripe right now. 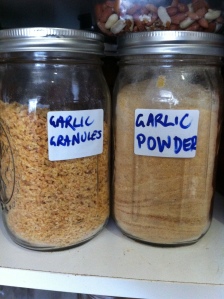 I had more garlic than I have been able to give away! These are both quart jars (946ml). I made the powder by dehydrating whole cloves which took ages and the granules by dehydrating crushed garlic (well, Thermied garlic anyway) and it took a mere 24 hours! The powder is perfect for adding to mashed potatoes.

WE have also added mulch beds with almonds, pumpkins and potatoes planted out in the front garden, more sauerkraut made, a Christmas dinner harvested from the garden (except the broccoli), home education with the kids, visiting friends, dehydrating apricots and so very much more. 🙂

So, as you can see, we finished off a busy year with lots more busyness. I didn’t manage to do the things on my list of things to learn for the year (smoking meat) but I did learn so very much more that I am quite content with how the year went for learning.

I hope that 2015 brings on many more dreams of self-sufficiency realised (garlic and pumpkins this year and cabbages too) and with a brain shoved full of even more wonders of permaculture.  A very happy and safe new year to you all and let’s bring 2015 in with a great big eco-green bang!

So what has been your favourite thing of 2014?