Here’s a quick update of what’s been happening around our little farmlet. 🙂 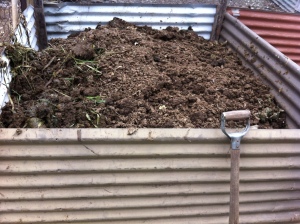 It’s all about compost. We have a serious lack of the stuff so I’ve a friend in Ballarat who comes to visit once or twice a week and who brings me a ute tray load of manure and lake weed each time. This is the trailer load we collected when we were in Ballarat a few weeks ago. It’s now covered in a cut of carpet and some tyres to hold it all down. It’s already rotted down and lost 15cm in height. 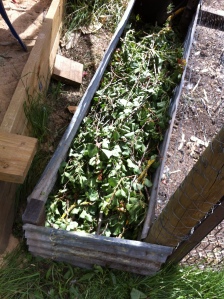 The start of a new garden bed. Fortunately that day our neighbour was pruning his fruit trees the same day and was more than willing for me to take the prunings to turn the beds into hugelkultur inspired beds. The leaves will provide some nitrogen from their greenery and the branches carbon and water holding capacity. The soil was sourced from one of the few remaining raised garden beds and the tin was from them also.

Whilst we were building garden beds, Jasper and Allegra were at the neighbour’s place having a blast. Orik found the art cupboard was open and asked to do painting. We set him up with paint and the cubby but he soon tired of that. This is the new canvas he discovered. 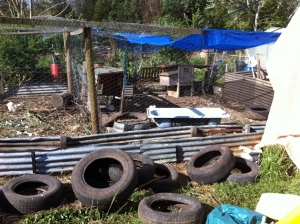 The last of the tyres from around the chook pen have been replaced. This garden bed will be filled with all things fodder crops.

The idea for growing some of the fodder for the goats came from 5 acres and a dream where Leigh is aiming to grow most, if not all of her goats fodder. I reviewed her book a few months back (see here) and highly recommend it. We haven’t a hope on 1/2 an acre but we can definitely contribute and we have shared a few ideas between us. 🙂 I will be planting more Tagasaste trees in there along with a plum to hang over the chook pen and lots and lots of comfrey. The goats will nibble anything that pokes through the fence, the trees will provide cut and feed fodder and shade in the latter part of summer days.

See those little white things? They’re the nitrogen nodules on the roots of my 20cm tall seed grown wattle tree. Considering the size of the pot I was astounded to see those nodules. 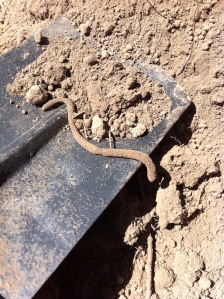 Got to love finding a huge worm in some topsoil from a friend. That is a standard garden shovel he is resting on and he is unstretched!

My Lumina pumpkins are going crazy! I have several large fruits and at least a dozen female flowers awaiting pollination or having just finished flowering. 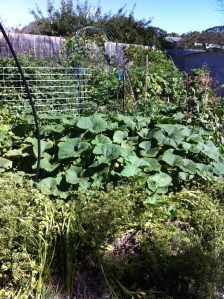 The pumpkin patch is going great guns. In fact, all of them are. I have 4! This is the lumina bed with tomatoes (unseen) and directly behind the pumpkins. To the front of my pumpkins are my totally failed celery crop all going to seed. I’m going to try celeraic next time.

My butternut pumpkins being trained to cover the greenhouse and shade it somewhat.

Lunch almost exclusively from the garden. Spaghetti squash with tomatoes, potato onions and green beans, all from the garden. I used local organic olive oil to fry the onions and I added some cheese and salt and pepper too. Delicious and Jas asked for seconds and thirds!

Comfrey. Lots of it. I sat and threaded it onto some cotton twine to hang up and dry.

Comfrey can be used to make a healing salve and also for the goats too I believe. Here’s the link. Thanks Leigh!

Some of the leaves are a little large.

Strung up across the living room. It’s a most comfreytable room. 😉 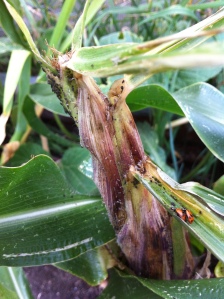 This cob of corn has been hit by aphids but Mother Nature has thanked me for no pesticides by sending in her ladybugs. There are 3 there. There are 2 in the photo and a 3rd not visible but they will be snacking on those aphids like they are chocolate!

A mornings harvest. I picked this yesterday! 2 buttercup pumpkins (they’re not much bigger than a very large orange), a cob of corn that appeared to have been bumped and was coming off the plant, 2 purple potatoes, 2 eggs, 3 leeks (they’re a little small but I’m trying to catch them big enough to use but not gone to seed), and lots of tomatoes. These are cherry tomatoes, a type I call “Lynda’s weeds”. I pick my tomatoes just as they start to ripen and let them colour up in the pantry. I harvested nearly as many ripening tomatoes again this morning!

This shot was taken from across the creek. It looked far nicer in real life but the view through the trees of the veggie garden made me smile. It’s looking so productive. 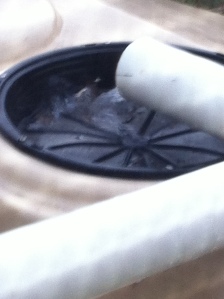 Can you see that? The stuff coming out of the pipe! Yep, it’s raining here. In fact it’s rained all afternoon and heavily too. We drove out to pick up Daddy from the train so he didn’t have to juggle work bag, pizza, shopping and an umbrella and as we got in the car our grass driveway was experiencing a flash flood of about 5cm deep! The creek is running full flood too.

There are lots of things happening around here. Planning for winter gardening is starting to come together and I have many seeds to sow tomorrow for winter crops. 🙂

What’s been happening in your gardens? Are they buried under snow or inundating you with zucchinis and other summer crops?

9 thoughts on “A photographic update”