I do love long weekends. 😀 An extra day with back up and support with the kids means we both get the opportunity to do some jobs without little people always wanting to “help”. 😉 It also means an extra day where we get to spend time as a family and that is always a good thing. 🙂

We spent Saturday working hard on part 1 of the long weekend plan which I’d put together. Sunday we had plans for a trip to Ballarat.

Last week whilst in Bacchus Marsh I made a trip to a plant nursery in order to pick up a kiwiberry which I’d seen advertised on eBay. Whilst at the nursery I also picked up a male and a female kiwi plant, 2 blueberries and a dwarf red Dacca banana and some strawberries. The banana was in need of a 60L black rubbish bin for its wicking bed in the back deck passive solar greenhouse so we went to Bunnings to pick up the bin plus some extras. After talking with a friend I was also on the lookout to see what else I could pick up to plant in the garden and scored with a native Finger Lime for $29, a goji berry for $9.50 and a Chilean Guava too. I planted the rather prickly finger lime in the greenhouse and put the others into a container with some water to keep them moist. I learned the hard way about crappy potting mix in the kiwi and blueberry pots which dried out in 1/2 a day and didn’t do the plants any favours. 😦

After Bunnings we headed over to fill the trailer with things manure and lake weed. 🙂 Free! The Ballarat sale yards (on the corner of La Trobe and Learmonth Streets) have a huge pile of manure which is free for the taking. Although sellers aren’t supposed to have wormed their animals within a certain amount of time before selling their stock, it does happen so this manure is not organic however, I figure that the worming solution will wear off in the manure about the same sort of time that the manure loses its heat and I’ve used it before and seen huge fat worms crawling in it once it’s cooled down somewhat. I’ve learned the hard way though that it’s best to hot compost it as the last lot which I spread out on some logs for a new hugel bed didn’t hot compost and it grew me a spectacular crop of extremely poisonous hemlock! NOT what I wanted in my garden.

The manure is spectacular in the soil and adds a lot of nitrogen plus the digested grass and hay for carbon but to create the perfect mix, adding some lake or seaweed is better I reckon. Lake Wendouree in Ballarat is dredged of its weed, up to weekly I believe. The dredged weed is then dumped at an area not far from the sale yards (on Gillies Street not far from Gillingham Place). It smells almost like seaweed except for the distinctive lack of the salty smell. Far less pungent than rotting seaweed actually. 😉 There are piles from several weeks ago which are rotting down nicely and are much denser, hence you can pack a lot more into your trailer or the piles of the fresh weed which is much lighter so you can carry more of it. I like the fresher stuff simply for the ease of loading it.

Armed with gumboots, shovels and forks we loaded up the front half of the trailer with manure then the back half and over the top of the manure with lake weed. Forks and shovels in the trailer, a tarp on top and strapped down (we would not have been pleasant to follow if not for the tarp 😉 ) we headed for home. With time constrains of Martin heading out to a music session at the pub we just parked the trailer in the driveway. 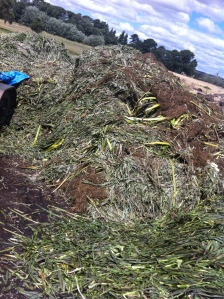 Only a small portion of the lake weed. I opted against a picture of the manure. It’s pretty obvious how it will look after all.

Half manure, half weed. A perfect mix for a well-fed Autumn garden.

Monday morning and a happy Australia Day saw Martin reversing the trailer into place beside the compost bays before I took the car out to meet a friend, L, and see if some nectarines growing on the side of the road were ripe. Sadly they are still as hard as rocks and tart to taste but the tree has been duly noted for a return visit in a few weeks. I’m keeping that location a secret, had you noticed? 😉

L and I then headed out to Blackwood for coffee and cake before heading on to St Erth to browse the Diggers shop. I came away with a dwarf apple tree, an apricot tree, 4 cranberry plants and several packs of seeds. After a tour of the gardens L headed home to plant up her purchases and I got stuck into building a garden bed for the cranberries.

Cranberry bushes don’t grow in water like they are shown to on the cranberry juice ads (that’s just commercial harvesting) but they do like lots of water but not permanently wet roots. With 3 kids home, home education and being a lazy gardener I figured their chances of survival was best in a wicking bed. A wooden box we’d been using for wood storage that wasn’t working for us any more was repurposed and placed outside next to the pergola and back steps.

Some pond liner leftover from when I built our pond was perfect for lining the box.

Jas gave me a hand by finding the worms curled up in the folds of the liner which had been left outside for some months and they were added to the bed too.

A long narrow pot works for a water inlet and I stapled it and the liner to the edges of the bed.

A hole drilled and a small piece of hose in there for the overflow pipe.

Some soil, a heap of manure in the middle to rot down then more soil on top and then the cranberries in (away from the manure).

Some mulch on top then after an initial worm wee watering in, lots more water to fill the reservoir in the bottom of the bed.

I’ve now got a pot sitting under the wicking bed outlet to catch the overflowing water. Waste not want not right? I’ve since changed out the soil in it too as it was the soil leftover from the tomatoes I’d been growing inside over the winter and up until now. I’m working out what to plant in there now. Something fairly low. The larger square pot is in anticipation of a grape which will be trained up over the pergola.

I’ve glossed over the “how-to” as I’m sure there are far more experienced people who have shared the details online. Google is thy friend. 😉

I also planted out the apple and apricot trees, the blueberry bushes and harvested some potatoes to plant the blueberries and apricot. Again, I’m most impressed with the size and quantity of the spuds I grew. I’m learning more and more that good soil equals good crops. 🙂 The trailer is also mostly emptied. Just a little bit of remaining manure that I think I will add to a garden bed near the front door. I might need a little more soil to fill the bed after or any visitors might be overwhelmed with the smell. 😉

Well, it’s not long after 8:30pm and I am pooped! I ache sufficiently to remind me that I’ve worked hard these last 3 days and think I need a 3 day weekend to recover from my 3 day weekend. Thankfully the weather was much cooler although I could have done without the panic that a 2°C morning brought on. No frost but it must have been close! Anyway, time for me to hit the sack I think. It’s another busy day planned for tomorrow with an official start to home schooling too. 🙂