I’d reached the point where I was very nearly sick of the sight of Ballan. All work and no play had pushed to boundaries of my sanity and it’s been a long time since we’ve had a holiday so, when the weekend of the Kyneton Show came rolling along again we were very keen to go.

Last years show was very nearly a wash-out with showers on and off all day long. It was a day for rain coats and gumboots and yet, still a lot of fun. This year was much finer with some cloud but a goodly lot of sunshine too. Makes for a much more pleasant day. Like last year, we met up with friends from Trentham and with 4 adults and 8 kids off we went. First stop was the local politicians stand to collect helium balloons for those that wanted them and then on to the Kyneton Baptist Church stand where Jasper and Allegra got some help to build a bird house. It was well thought out and a brilliant concept – grab 2 bits of wood off this pile, 1 from here, another 1 from that pile and 1 more from the other pile then come back and nail it together. I was most impressed by the patience of the man who helped Jasper to build his as Jas, armed with a hammer, would suddenly be no longer watching what he was hammering as he was fascinated by the show train that kept whizzing past. It was a sheer miracle that fingers weren’t hammered I tell you. 🙂

We’d forgotten to bring our pram up so we were faced with the idea of carrying 2 rather heavy wooden bird houses back to the car or around the show. Fortunately the next stall offered to hold them for us until we returned. 😀 We bypassed the kids painting tent in favour of the miniature coal-fired traction engine, which of course being crazy Thomas the Tank Engine fans, my children simply adored. THIS year however, Jas actually had a ride on it. We saw the show train (again he went on it this year), the petting zoo, reptile stand (how CAN people wear snakes around their necks), the raptor exhibit (how glorious is the wedge tailed eagle!), pony rides and all the usual side-show alley amusements. 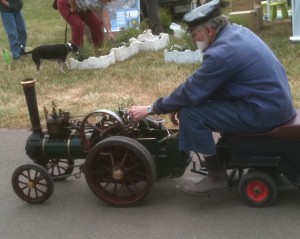 Oh so happy to be here

The wedge-tailed Eagle can have a wing span of up to 2.27 metres (7 ft 5 in) and is one of the largest birds of prey in the world.

By this time we had hungry kids and hungry adults so we sought out some shade and tipped out the contents of our bags. A pretty divine lunch of sausages in bread with all sorts of yoghurt, fruit, veggies, dip and other such yummy fare followed. MUCH cheaper and healthier option than buying lunch there, and tastier too I reckon. Ironically, last year there was a huge line for the big corn-dog hot chips van. This year its attendants all looked incredibly bored. In all fairness it was a much colder day last year too.

On our way to our picnic patch we had arrived at the one and only even I wanted to see. The fowl sheds. 😀 Chooks galore! I tell you though, you can hear them a mile away, with roosters of every size, colour and shape imaginable all crowing their little hearts out! I was mightily impressed with several of the birds in there. Firstly was this GIANT and I mean absolutely HE-UGE Australorp Rooster who I would have to say is the most impressive rooster I have ever set eyes on. He stared regally down from his cage like a haughty king surveying his domain. He really was exquisite. I reckon he was the size of a good-sized turkey just to give some perspective. On the other end of the scale were the Old English Game roosters and there was this one little fellow who was about the size of Honey, our smallest Pekin Bantam hen who strutted around like he owned the joint. For anyone who has ever read the Belgariad, this fellow was DEFINITELY a Prince Kheldar of a rooster. And the crow on him! Far bigger than you would credit his tiny body for. He must have got stage fright as I walked past though because he muffed it at the end which made me giggle. There were also geese which honked at us as we wandered past, 1-5 day old chicks, including quail chicks which were much bigger than I would have thought, ducklings that I would guess would have been 6-8 weeks of age and some ducks too. I got to see my first real Muscovy duck and I am most definitely impressed with them. The 2 drakes were also very regal looking and unlike all the roosters and ganders all making their presence known, the stood there silently surveying the chaos around them. The duck also just stood and watched and not a sound did any of them make. It backed up one of the reasons I had for choosing Muscovy ducks – they are known sometimes as quackless ducks as they only quack in times of extreme stress. I’m sure our neighbours will appreciate that.

Anyway, once lunch was over the kids all had a lovely time in the kids tent painting plastic bottles upcycled into pin wheel fans. 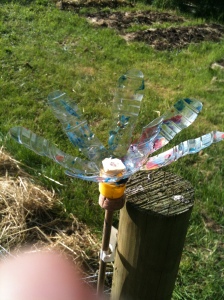 We headed off after that with 3 very tired kids and 2 almost as tired parents, but back to Ballan where Martin continued to work on Trevor whilst I made further progress on the chicken run before heading home for an ultra early night.

Today was a huge progress day. As we’d collapsed into bed very early last nigh, we of course woke early so Martin made the most of it and took off on the bike some time just after 6 whilst I lay in bed awaiting the bombardment of 2 children that never came. Jasper and Allegra actually slept in, 7:15 and 7:30 respectively! If a day at the show is what it takes to get a sleep in past 6:30 I reckon we need to find a show to attend every day! BRILLIANT! 😀 We dragged slowly through the morning, mostly due to me suffering a junk food hangover (I’d eaten some chocolate and chips (crisps) on the way to Ballan) as well as a raxed neck from lugging 14 kgs of baby on my back for most of the day. By the time we finally got to Ballan it was nearly 11 so Martin hauled off with the trailer and a sleeping bubba to pick up some tires whilst I got to work with my new tool.

I’d been dreading the need to sew together the different rows of wire we’d used to create the fence. Weaving in and out with wire then pulling it taut was likely to become tedious and extremely labour intensive very quickly and I’d been procrastinating all week about going up to the house to do it. A chance meeting and conversation with a lady I’d met at a Kyneton Transition Hub wicking bed workshop a few months back which was overheard by a friend of hers, resulted in me getting a huge get out of jail free card! She described to me a wonderful tool that would help me crimp C-rings around wire which would work perfectly to close up the layers of wire. A quick google search and a husband in Bunnings at 7am this morning meant I cut several hours worth of work down to about 45 minutes! Only need to finish securing the wire around the water tank, fitting the door and then doing up their accommodation (new roof, nesting boxes and perches). Hopefully the kids play ball tomorrow and I can get it done. 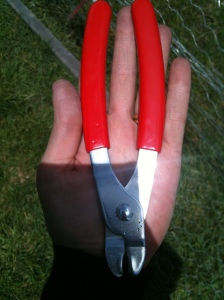 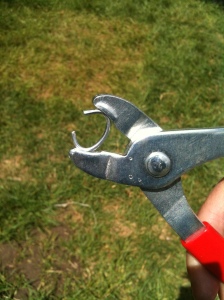 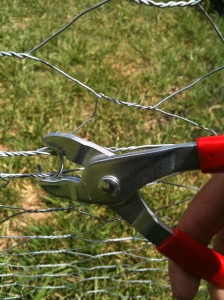 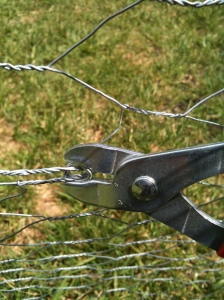 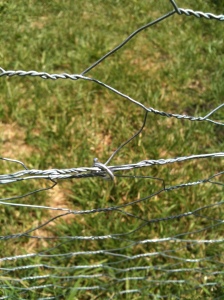 Due to some predicted low temperatures, my final job before heading home was to frost-proof my frost sensitive plants which so far, is pretty much everything I’ve planted. 😦 The beans (all 27 of them so far), the tomatoes, capsicum, corn, watermelons, pumpkins and zucchini are all buried under straw and even some dried grass from mowing and the spuds have been buried under compost. The kids and I will go up again tomorrow and I’ll move the mulch to go around the plants, not on them and then help the potato plants to come through a little more. They may be a little too buried for optimum levels, but protection was the main aim here. 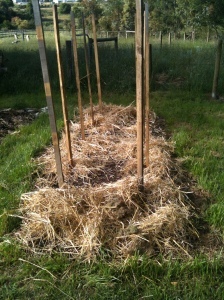 The temperature in Ballan was forecast to drop to 3 degrees tonight which puts it in to the zone possible for frost. I don’t really understand yet about the conditions needed for frost but I do know that 4 degrees or under is the frost range but I’m not taking any chances. I’ve used whatever straw is available to bury my tomatoes, capsicums, beans, zucchini, pumpkins and watermelons. This is the tomato and capsicums under their bed of straw. I hope it’s enough. 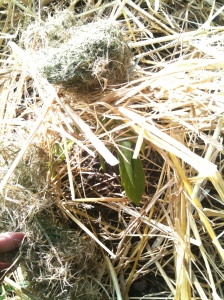 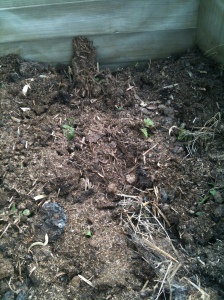 The spuds, also sensitive to frost, received a different covering – compost! If you bury their leaves they will turn into roots and potato roots grow spuds. I’ll go up tomorrow and dig out the tops of the leaves to allow them some more sunlight but tonight they rest warm under composted horse poo. Toasty!

Here’s a couple of other photos from around the place too. 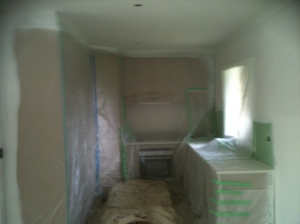 Exciting times. This is my kitchen buried underneath its plastic whilst the house is painted! 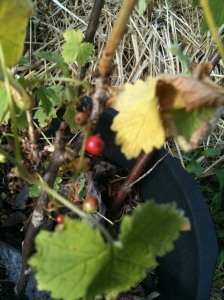 The first harvestable item! A currant! Could be a black currant only half-ripe but I think it’s a red currant. They’re all mixed in together so it’s hard to tell. 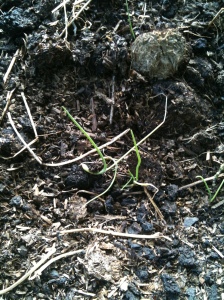 Onions popping up and doing their thing 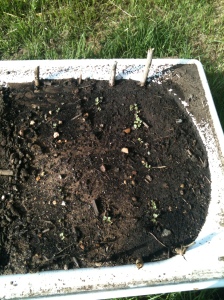 The radishes I planted in between the carrots are popping up. Here’s hoping they do better than the failed milk carton pot ones. 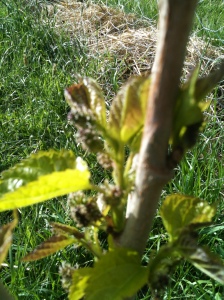 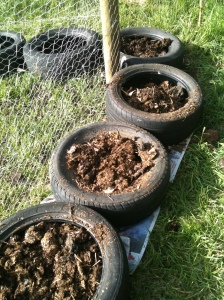 The tyre edging/garden being filled with compost 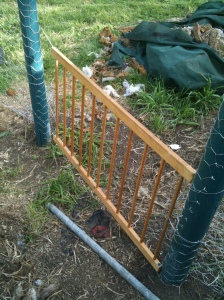 A temporary measure to contain the kids when we’re driving the car around or for safety around Trevor. 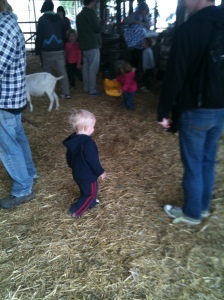 Orik in the animal nursery

No photos of Allegra from the show – she wasn’t so much into doing things this year and I didn’t get a photo of her building her bird box. 😦

Well, bed time for this little black duck. See you on the green side.