Wow, it’s been ages since I disappeared off-line. Nearly a month! And no, I’ve not been without a laptop that entire time but it has taken some time to get things up and working again. Not that we’re there entirely yet either. 😦 END_OF_DOCUMENT_TOKEN_TO_BE_REPLACED

If you’re part of a sustainable group in Melbourne and after a group excursion or some inspiration I can’t recommend visiting Gav more highly. His garden is a huge inspiration for all things eco, recycled and green.

I bought myself a cheese kit last year for my birthday gift from my mother and mother-in-law. It’s been sitting there since October, untouched aside from being unpacked from the bag in which it arrived and packed into a tub for safe keeping. Not good enough. 😦 This year is all about doing things and following through on plans. 🙂 END_OF_DOCUMENT_TOKEN_TO_BE_REPLACED

Melbourne Cup Day, the first Tuesday in November is a special day for those in the Melbourne metropolitan area as it’s a public holiday. The only one in the second half of the year (nothing between the Queens birthday weekend and Christmas) thanks to Show Day holiday in September being canned. 😦

Many people take the Monday off work to make it a 4 day weekend and that’s what Martin did. We’ve spent the weekend preparing for snake season and clearing away the wood piles and branches littering the front and back gardens. Tuesday however I had the invitation to spend some time visiting a friend and fellow blogger Lynda from Living in the Land of Oz fame. I left home not long before 10, arriving in time for a cuppa and to meet Lynda’s lovely sister and her sisters gorgeous grand kids. They headed out for a tour-de-parks and Lynda and I headed out to the gardens to hear their plans and ideas for transforming more of their garden into a food production paradise. Something new here, more gardens there, and some fun ideas over there too. All I can say is watch her blog space. 🙂

First stop after the patio area was to a  rather large treat saved for me and protected by a punnet placed on top. A strawberry of rather generous proportions, almost glowing in its delicious ripeness, sending out its siren scent of freshness and all with my name on it! I picked it, photographed it and munched it. Mmmmmm 🙂

This is the strawberry that Lynda grew.

On to the other beds which I admired with nothing feigned. Lynda has great gardens and will have a great crop to harvest over the Summer and into Autumn for sure. 🙂 Lynda’s overall garden space was much smaller than I’d thought based upon the photos I’ve seen which makes it even more impressive to see what produce comes from her garden, what massive veggies and how many self seeded plants (weeds if you like ;)) in her beds too.

Lunch was delicious with chicken meatballs, lamb chops, potato salad and cooked tomatoes, ginger beer to wash it down and great conversation and laughs with which to enjoy it all. It was a delicious lunch and I had a lovely time. 😀

Never give up hope. This is the lesson I’ve learned in the garden of late. I replanted this rose-bush even though I thought it likely to be dead (I did prune it rather hard) and it’s done little since… Until now. I can’t wait to see flowers.

Sadly I had a bit of a time limit on my visit. I couldn’t leave Martin with a list of jobs a mile long and 3 kids, all with colds, for the entire day. We loaded up all the gifts Lynda had for me. I’d dug out all her weeds (self seeded tomato plants ;)) to plant in my own gardens, loaded in a generously gifted Lemon Balm in a pot, a set of draws with shelves above, spring onion seeds and a huge bag of old towels and sheets for me to upcycle into kids pajamas and reusable “paper” towels and the like. 😀 All I had taken down was a carton of eggs, sadly not even full. 😦 Lousy swap on Lynda’s side of things hey. 😦 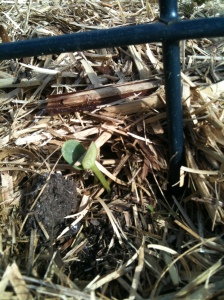 A watermelon! I figured none of the seeds would grow but waddaya know! Maybe there are more awaiting optimal conditions.

So, loaded up I headed off, this time to Melton to visit with Gav and Kim. I had a few things to pick up from them including cheese kit gear (curd nerd-ville here I come :D) and it was a nice day to have a cool drink poolside. Sadly I couldn’t spend the time I would have liked with my friends as I was already later than I had planned getting home, so I bid them farewell and headed off home.

Arriving home I discovered my amazing husband had cleaned the kitchen, washed all the dishes and was working his way through the vacuuming! Well impressed. 😀 And grateful too. 🙂

This is the strawberry that I grew. Divided into 4 (a slice each for the kids and I) it didn’t go very far but oh my the taste was divine! Bit smaller than the whopper Lynda grew and saved for me.

We finished off mulching the branches (thanks to our handyman) and Martin spent some more time sawing up the wood pile until a part went missing from the chainsaw (seriously, power tools in our house cause more angst than anything :() and although I wouldn’t say we’re exactly snake proofed I know we’ve put in 4 solid days of attending to and dealing with much of what we needed to around the garden. 🙂

I thought I’d share this idea I’ve had with you all. I’ve been addressing my perceptions of things. Snakes, sharks, carnivorous dinosaurs (Jas is right into dinosaurs at the moment) have an image of being evil but they’re not really. They do what they do because that’s what they do, nothing more. A snake will bite if it feels threatened. Some more so than others (brown snakes are rather aggressive) but they are not evil because of that. It’s taking some time to adjust my thinking on this but we do now live in the country and I guess every area has its risks. Country locations have their snakes, the city has its traffic. Some areas are prone to storms, others to long hot dry summers, others to monsoonal rains and cyclones and many of our beaches are visited by sharks, including those that will eat people. It’s about recognising this and adjusting ones thinking to fit in with Mother Nature, not expecting her to fit in with us. Sure I can do my best to snake proof our property (and I will) but I don’t have the right to expect never to see a snake. 🙂

Does that make sense?

Several posts on blogs I follow have really got me thinking of late, about what the future will hold. Gavin from the Greening of Gavin had a dream which he wrote out and shared as a short story (read it here) which really struck a deep chord with me. Thanks Gav! And today, I made a conscious decision to try to live some of that dream. END_OF_DOCUMENT_TOKEN_TO_BE_REPLACED