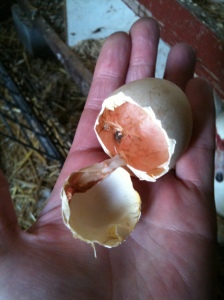 See, the egg does come…

Blackie, our silkie hen who is, well, surprisingly black, started sitting eggs a few weeks ago. She didn’t like being moved to the smaller cage though and deserted her eggs. She wasn’t over the concept of motherhood though as she started sitting on the eggs left in the nest by other hens, and being curious as to how she would go, we left her to it. She sat on 2. 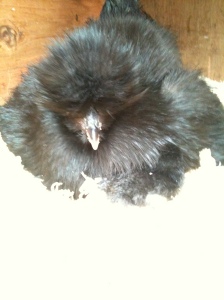 Fast forward to today. It is 21 days later, not that we knew that this morning as I hadn’t marked down the date when she began to sit, so we’ve been having a peep under her soft breast once a day to see if we could get a gauge. I candled the eggs about 10 days back and was very excited to see they were both fertile and one even obliged by wriggling inside the egg. Imagine the excitement. 😀 Well this morning as I went out to the chooks to gather any eggs I could hear a curious noise. Peep. Peep. Peep peep. Peep. Clueless me thought it maybe beginning to hatch as I’d heard that they begin to make noise inside the egg just as they start hatching. Imagine my surprise upon gently lifting Blackie to find a completely dry and very fluffy, rather small black baby chick. Blackie gave me a withering look of, ’it’s already out silly’ and then graciously and with humble pride, allowed me to pick up and photograph her pride and joy. 🙂

I am pretty convinced the father is Black Boy our rather noisy and randy rooster (as opposed to the other rooster that was mature a few weeks back who is no less randy but not top cock like Black Boy) but in the bizarre twist that cannot occur with mammals, I am unsure as to who is the mother. Given the tiny size of the chick I suspect it might be Mrs Silverpants (now deceased) who laid it but it may also be one of our Henny Penny’s (Dorking hens) of which there are 3 standard coloured and 1 black one. I was sure Blackie was not the natural mother as I think she’s the hen laying the diminutive brown eggs of which we’ve seen none since she began to sit but who knows. There are 5 feasible mothers but Blackie has well and truly claimed Star (as named by Jasper) as her own.

She’s making an excellent mother too. She’s now safely ensconced in the smaller enclosed pen to keep food and water safe from the other gutses and also to keep the baby safe from its less than caring relations, and after quickly shoveling down some food she is back snuggled down on Star and the other egg. I’m hoping for the second hatch today or tomorrow. 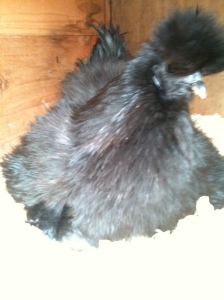 Sorry for the over exposed photos but the day is rather overcast and the hen is black. Overexposure was the only way to make a black chick on a black hen in a dark location visible. Photographer I am not.