Disposable nappies have a HUGE impact on the environment. They’re made using plastics and they take ages to break down, if indeed they do in entirety. BUT as a parent who had 3 in nappies, the convenience of a disposable nappy is hard to give up. Not impossible, but definitely not easy.

For those that aren’t parents, this post may not be of any interest to you. Respect. For those that have been there done that, you may or may not agree with me but you did what you felt was best/easiest/all that you knew at the time and I don’t judge. For those that are about to embark upon the journey of parenthood or who are in the midst of the poo party of those first few years please know I do not judge you for a single second! Parenting is hard enough without adding challenges. BUT, maybe I can share some knowledge you weren’t aware of. If I can, then yay. 🙂 but if I can’t, then yay too. 🙂 This is just my journey with nappies.

When Jasper was born we had a whole heap of bright ideas on using cloth nappies. Modern cloth nappies (MCN’s) that is, never the old fashioned fold em up terry toweling jobbies. I bought a heap of the cutest patterns and designs, different styles and colours. He was born weighing 6lb15oz or 3.116kgs so not a big fellow and he had (still has) the scrawniest little chicken legs, just like I had as a kid. When I packed him into his cute nappies they fell off him or he weed straight out the sides. We used so called eco disposables (they’re still not the most eco friendly of things) for a while until he finally fitted his cloth nappies. I had undiagnosed post natal (partum) depression though and motivation to clean, do washing etc was nearly non existent. Changing cloth nappies several more times a day than you do with a disposable then washing 8 or so of them, many with poo on every day, then hanging them up, getting them dry (Jas is a winter baby) and getting them ready to wear again was a task well beyond my capabilities at the time. So back to the eco sposies, then on to the cheaper, easier to get supermarket sposies. 😦

Fast forward 17 months and repeat, except with 2 kids! Allegra was a chubbier baby but had a habit of pooing up her back each and every time (aka Number 3’s). I tried cloth of several varieties and every conceivable variety of sposie to contain her explosions but to no avail. It was a battle I lost at least once, and up to 5 times a day for months! I was NOT going to add to my already enormous washing pile by adding cloth into the mix! 😦 And again I had undiagnosed PND.

My desire to be more sustainable was slowly increasing over this time and had kicked up a big notch by the time Orik was on the way. We had tried and been using for a while, the Eenee cloth nappies and I’ve got a reasonable collection of the Weenee pouch nappies as well as several of their older front tabs white nappy style too (these are no longer available). I bought the snibs for Mr Orik but as he was born at 8lb8oz or 3.850kgs they were a little small and fitted not much longer than a week. In the meantime, Eenee had brought out their 100% compostable nappy range which we jumped on board to try with Allegra (post ‘splosions stage) and with Jasper. We did get the occasional side leak (they’ve sinc e changed their design and they now have MUCH better leak guards) and despite the extra cost per nappy, we used a combination of the compostables and cloth. We also used the flushable/compostable nappy pads as night boosters or also as a sposie option to the pocket nappy when we went out. I’d also bought some pocket nappies off eBay. They’re a waterproof nappy cover with a soft absorbant inner lining and a pocket into which you can insert various levels of absorbency – folded up toweling nappies, microfibre nappies or bamboo nappies, whichever you prefer. My pocket nappies came with a microfibre inserts so we fold a microfibre nappy, wrap it in polar fleece (microfibre is rough on soft skin) and then put a flushable liner on to help make any poo easier to clean up and we can just change this without needing to change the nappy outer. 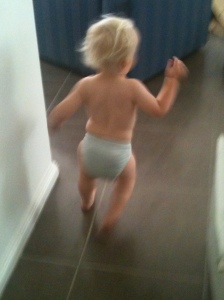 YOU try taking a photo of an active toddler on an iPhone that isn’t blurry! 😉

Today Orik is in a light blue bum and he looks so cute with his little padded posterior waddling around as he walks. It provides extra padding when he lands on his rump and it also assists in keeping up his trousers (although he’s a chunk monkey so that’s not a huge issue 😉 ) and I no longer mind the washing. I do a load every 2-3 days. Any stains are bleached out by the sun, the smell washes away beautifully and it’s just not a big issue for me like it used to be. Not having PND this time around has made a huge difference though.

Allegra is toilet training so she’s only needing a night nappy and Jasper is now fully toilet trained day and night so our daily nappy count has dropped dramatically. Allegra was happy to wear a cloth nappy to bed (yay) although we do still use some sposies, usually at night to try and keep Orik comfortable so he might just sleep through. We had been using sposies whilst we moved 😦 as sadly Ballan is outside the collection range of the compostables and it’s not safe to home compost them in standard cold compost (I’d love an aerobin dear hubby – hint hint 😉 ). I’d call Modern Nappy Distribution when we were running low on nappies, they’d then drop off our order and pick up the big bag of dirty nappies to compost them in a hot compost system but they don’t travel quite as far as Ballan. It is a wonderful system though and it kept our landfill footprint down too (always a win) but with moving it was needs must. I was stoked when I found our box of cloth nappies though and had a lovely time unpacking them. Once the nappy bucket moved up here we were back onto cloth! It’s been a little hit and miss but I think we’re back into the swing of it. I look forward to finding my small wet bag though so we can take cloth on outings too although I have found my larger one – camping and cloth nappies maybe?

Also to note, Eenee also have reusable baby swim nappies that have to be the cutest things I’ve ever seen! The also have a range of adult incontinence products using the same compostable nappies and nappy pads, reusable incontinence swimwear for children and adults, overnight shorts for toddlers  and also biodegradable sanitary pads. They pretty much cover it all. 😀 I can’t personally recommend most of these although all 3 of my kids have used the swim nappies and the toddler shorts.

Other tools that can help a cloth nappy using Mumma are the nappy washing services. A friend of mine runs one but sadly she lives interstate so not much help to me. Check our her blog over at The Eco Mum (she’s another wonderful lady getting in touch with Gaia again and doing her part to protect our mother earth. Her business, Lavenderia NappyCare is a nappy wash service where you can buy or hire modern cloth nappies (MCN’s) and have them washed for you. You can also use your own nappies and just make use of their nappy wash service. The cost is from as little as $0.40 per nappy! So per week that $20! And the second child’s nappies are 50% off!!! 😀 Hiring the nappies is from $10 a week too! So, it’s not going to cost an arm and a leg and the icky part is someone elses responsibility! 😀 They’re the only nappy wash service in Australia that uses MCN’s and uses natural environmentally friendly cleaners too – no chlorine bleach! 😀 Woo hoo! 😀 There are other nappy wash services but many do use chlorine bleach which can cause nappy rash and they will only wash flat nappies, not MCN’s. I don’t know about you but the old fold em cloth nappies hold NO interest for me. Horrid tight legged plastic pilchers and the bulkiness of those HE-UGE night nappies! MCN’s just need a night booster which is a little bulkier but not by much. If the link above doesn’t work, check them out at www.lavenderia.com.au.