Our , , field of what is best called hay has reached ridiculous heights. And after receiving the news on Friday that our neighbours behind us had seen a sluggish but waking up tiger snake in their chook house we knew that this long weekend we simply HAD to focus on fixing our lawnmowers and then reducing the undergrowth too much more managed and snake-unfriendly heights.

A tiger snake. Venomous and not against a bit of human biting action if the need arises. Not deliberately aggressive though, unlike the other local resident, the brown snake.

Ok, that picture has taken me some courage to find and share, My hands do NOT want to be typing so close to even a photo of a snake. 😦

Our mower that came with us from the Spotswood house decided to bite the dust over 6 months back but this hasn’t been a problem as a) the grass hadn’t grown due to lack of rain and b) we had a ride on tractor mower. Then Trevor started playing up. We fixed him, he broke. We fixed him again and something else broke. It’s been an ongoing saga. Poor Martin has spent more time underneath Trev, tinkering and fixing him that riding him. We think we have him just about sorted now though. *sigh*

Yesterday though, Martin focused on the old mower, finally, after working solidly for hours, managed to get it working. Mostly. It’s choked its way through the 18 inch high grass out the front, chopping about 1/3, stalling on occasion (hitting large spadefuls of baked clay left in the grass will do that to a mower) and eventually the light ran out. Still, we got some of it down, enough to get stuck in and continue along with today. The plan is eventually that our front garden will contain no grass but all garden, mulched paths and productive deliciousness. It will take time though. We have the trees cut and plenty of cardboard though to make a start so the system will involve mowing the appropriate area, sheet mulching it, moving the wood into the hugelkultur bed rows with mulch on top too (the poplar branches), then the mown grass (nitrogen ) will go on top ready for the compost top layer and plants (curcurbits this year). By moving in stages, bed by bed I hope we can get it all cleared and looking tidy rather than like a meadow with wood piles like it currently does. 😦

Whilst I was mowing yesterday and waiting for my powerhouse husband to come and restart the mower I had a look up about making silage. It struck me then that the grass was more like a meadow for hay and I remembered reading up on silage a while back that it’s just fermented grass rather than drying it to make hay. A quick google search on making silage at home found me this link and it turns out I can easily make my own silage! Great for the chooks in late Summer or Autumn when the grass runs out. Miss Anna might even like some then too. The lambs will be butchered once the grass runs out if they’re at size but if not they too can have some silage. 🙂 All assuming it works of course.

A handy bucket, a bag and lots and lots of freshly mown grass.

I grabbed some of our shopping bags, stuffed them full of grass, tied them off, turned them over and bagged them again. Due to not being so great at being air tight I’ve quadruple bagged them (I know, a lot of plastic being used) and I will shove them in the shed for a few months and see what happens. If they don’t work I am hoping whatever resultant sludge is left will hopefully be able to be composted but if they do work then I will have silage with a lower than normal carbon footprint. Sure there is plastic involved but it is reused plastic bags at least rather than new-made specially silage plastic and the silage won’t have traveled more than 30 metres by the time it is fed to the animals. That’s got to be a win, right? 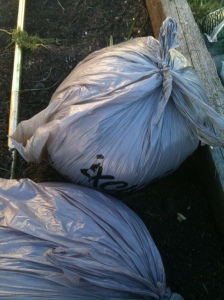 Bagged up silage, ready for storage.

Anyway, stay tuned for how it works out. 🙂

17 thoughts on “Mowing and silage”