In the interests of waste not want not and making the most of our lambs who were butchered last weekend I saved every scrap of fat that would have otherwise been wasted and have been busy rendering it down much to the disgust of my olfactory senses and those of my long-suffering husband.

Tallow refers to the fat of goats, sheep, cows and according to the soap calculator I saw, bear and deer too. Tallow can be used in cooking and I’ve been informed that beef tallow makes the most amazing hot chips. Not sure if ever I would try that but we shall see. Anyway, our lambs fat was destined for the pot for rendering and then to be used to make soap and possibly candles too. I’m keen to give a go at making my own fossil fuel free, low-carbon mile lighting. 🙂

Rendering fat is, I must say, a pretty disgusting job and I can now understand why the tallow makers who poured their smelly waste products into rivers around the world made riverside living undesirable and hence areas that now boast million dollar apartments were once home to the poor working class only.

To render down fat you are simmering and cooking the fat until it melts. It takes a lot longer than you would think. A large 19L stock pot half full of chunks of fat, some with strips of meat, too thin to cut off with my novice knife skills, all simmering away on the stove top with some water in the bottom for days. And days. 😦 Lid on I tell you! If you can do this outside I would highly recommend it!

Rendering down the lard in the slow cooker (the wood and electric stoves were full).

Anyway, once you have melted most of the fat, straining is the next step. Martin and I both gagged our way through this step, straining out the solids and pouring the fat and water mix into a container to set. The unmelted fat can be returned to the pot or disposed of. Once the melted tallow fat has set it needs to be cut up and lifted off the top of the water. Scrape the discoloured fat off the bottom where it sat on the water (the water is to prevent burning and to allow the heavier non-fat particles somewhere to sink, clear of the fat) and there you have tallow. I warn you though, that water stinks too. 😉 I scraped the discoloured fat off the bottom of the tallow and added the chunks back to clean water and melted it down again to refine it further, repeating a total of 4 times for the first lot of fat. I’m on the second render of the larger lot of fat now. 🙂 A slow cooker or wood stove makes things easier.

I poured my quadruple refined and looking good fat into the slow cooker with no water then once melted I poured it into some loaf tins to set, leaving it outside in the cold. It’s been sitting there whilst I tried to figure out how best to store it. It will stay stable at room temperature I believe for some time but I didn’t have sufficient containers to hold it for when it would inevitably get soft or melt over the summer so I decided to just make the soap and be done with it. Problem of storage would then be solved!

I hit up Dr Google again and came across several recipes but many were unclear as to which tallow they used and I figured that beef tallow would be different to sheep tallow (it is but not by all that much) and was drawing a blank until I came across SoapCalc. SoapCalc allows you to create your own recipe and for free. Stoked! 😀 I had a play with the calculator until I figured out how it worked and as I only have 1 fat/oil I’m using it was very easy to formulate my recipe. The soap calc takes the hard work out of working out how much water and how much lye you need to make a soap that is safe to use and doesn’t contain too much lye (it can burn) or too much fat (greasy with unused oils). Different oils need different amounts of lye to saponify them although I am definitely no expert. PLEASE read up further if you want a better understanding as lye is a dangerous substance and not worth taking risks with. Who wants to have a shower, lather themselves up with soap only to find it’s full of unused lye and begins to burn. 😦 Anyway, I typed in the weight of my tallow and went from there. 😀 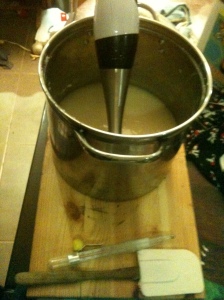 This evening I melted my tallow and mixed up the lye and water (NEVER ADD WATER TO LYE – always add your lye to your water to prevent it exploding and burning) outside so the fumes were not inside the house. With apron, gloves and sunglasses on for safety I mixed my lye into my melted tallow and began the process of bringing it to trace (making it thicken). The tallow took a lot longer to come to trace than the oils last time I made soap  and my poor little hand mixer was getting quite warm but it got there in the end. Into the cling film lined moulds it went and it’s now wrapped in a towel and safely ensconced on a shelf up behind the fire where it’s out of reach of little people yet still somewhere warm to slow the cooling process as much as possible. The scent of lavender still wafts around as the tallow still smelled a little unpleasant but as this is destined for the laundry I wasn’t so fussed as any remaining odour would be undetectable in the amounts of soap used per wash. Lavender laundry will smell nice though. 🙂 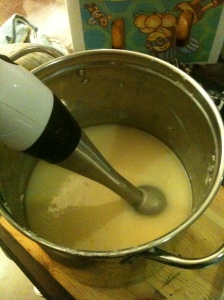 Just starting to come to thin trace now. About to add the lavender oil.

I will let you know how it turns out and post some photos when I cut it for curing too. 🙂

Amended to add: Soap MUST cure before it can be used or you will burn yourself when you use it. 6 weeks is recommended for the process of the lye turning the fats into soap to be complete but you can use your soap from 4 weeks. The longer you let it cure the harder it will be which means the longer your bar will last too. 🙂

If you ever decide to make soap at home I would recommend starting with a kit or with a friend who knows what they are doing. Even if you feel up to giving it a go alone to begin with, please follow all safety precautions when working with lye. It is highly alkaline and will burn badly if misused. Even a small splash of the lye oil mix can burn so please follow safety precautions and do not gloss over the safety aspect. Making soap I have to say is extremely easy BUT safety precautions MUST be followed. I can’t state this strongly enough. Thanks Gav for your tutoring and safety brief. You’re a great teacher. 🙂