There simply aren’t enough hours in the day when it comes to weekends at the moment and with Martin having a much needed mini holiday it was the kids and I this weekend. We did get a whole heap done in the garden but even so, there was plenty more which needed to be done too.

A drawer full of organic potatoes reaching for the sky.

The straw gardens into which the potatoes are now planted.

Getting the kids cubby house fixed up and ready to play in was one of the things that hadn’t made it to being done.

The platform onto which the cubby will be moved and under which there is now a sandpit.

We’d built the platform onto which the cubby was destined to go and we installed the sandpit underneath which the kids adore but the cubby itself was out of the range of my abilities and strength.

Sandpit, platform to shade the sandpit and a lash up with some shade sail over a tarp resting around some logs with some tank water in it.

With ratchet straps, an occupied preschooler and a fair amount of brute strength on my behalf we bodily hauled and lifted the first side up onto the platform. Some rather elaborate tied ratchet straps and pieces of wood to brace it whilst I bolted it into place. 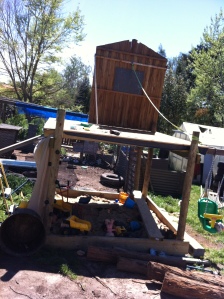 Second step was a repeat of the first but with the added difficulty of the existing timbers and ratchet strap ties.

My helpers deserted me for the rather more fun trampoline at this point but that worked well anyway as I had to change strategy for hauling the sides up at that stage.

4 sides up and all connected.

The 3rd side was the easiest and lightest piece so I lifted it up and attached it enough to hold it securely then hauled the last piece containing the door up and into place. Tech screws in and there are 4 walls in place! 🙂 Time for lunch!

And looking at the western side.

I spent the afternoon alternating between slapping a coat of paint on the roof of the cubby (it was heritage green but is now dark grey which matches the trim of our house) and building the safety rails. I managed the uprights and some of the hand rails before it was time for dinner and I will give the roof a second coat tomorrow before hopefully hauling it up into place. I’ll see how I go on that as I don’t know how I will go securing the ridge cap and I don’t want loose bits of roof flying off should the wind come up.

The plan is to source another of those 1000L pallet based water tanks and collect the water run off from the roof. No point wasting a water collection point in my opinion. 🙂 The shade sail will be more permanently attached to shade the sand from the western sun and we have a swing set to set in for the kids too. Both the swing set and the cubby were built for the kids of our old neighbours from Spotswood. Those kids now have their own families. It’s nice to give life to it again. 🙂

More to come on cubby construction. I promise to update you when it is finished. 🙂

3 thoughts on “I am woman hear me roar”